The Japanese have one of these effortless and inimitable attitudes towards religion.

It is both part of their lives, sort of, in the form of Shinto customs, visiting shrines, animistic “power spots”, good luck charms on mobile phones and local matsuri festivals. But these are essentially communal customs or acts that border more on superstition than “belief”.

Of course there are genuine believers too, especially in Buddhism — and even people who follow cults that carry out sarin gas attacks.

But for the most part religion is there to be charmingly indulged in, rather than frightened of, like in so much of the Judaeo-Christian world. 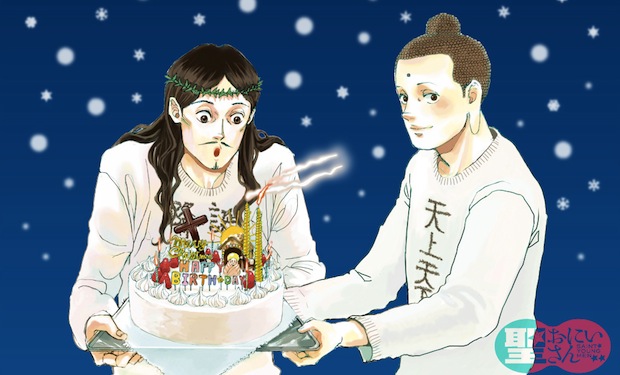 Could you, say, ever imagine an American comic book writer coming up with Saint Young Men and getting away with it? For the uninitiated, it’s the story of the amusing adventures of the Buddha and Jesus in modern day Tokyo, irreverent but also respectful in a charming way. The very fact that the religious figures have been elevated to such entertaining characters is an act of esteem.

Such a comic (and now feature length anime) would be enough to get you killed in certain parts of the west.

Here’s another great example of what I mean.

The Buddha Hair Salon Flower Pot is a series of Buddha heads in a variety of poses and in which you can grow a plant.

There are three types of facial expressions (laughing, angry, meditating) and two colors (red or white), and after a little bit of watering, the result is visually striking “hair” that sprouts up straight.

Can you imagine selling a plant pot of Jesus or even a Hindu god — and not drawing the ire of an institution or the fire and brimstone of fanatics?

In Japan, whether you’re religious or not, you’re allowed to cultivate the Buddha’s locks in order to make your home greener.

The (dis)courtesy of commuters and priority seats