October 3, 2014 by Tokyo Cheapo
Comments Off on Times Car Plus – Affordable Car Sharing for City Dwellers

This article by Greg Lane first appeared on Tokyo Cheapo.

While it’s great not needing to own a car in Tokyo (with all the incumbent expenses) there’s no question that it can be fun or sometimes necessary (big shopping trips) to get behind the wheel. That’s where car sharing services – like Times Car Plus – come in really handy, and for much less money than you might expect. 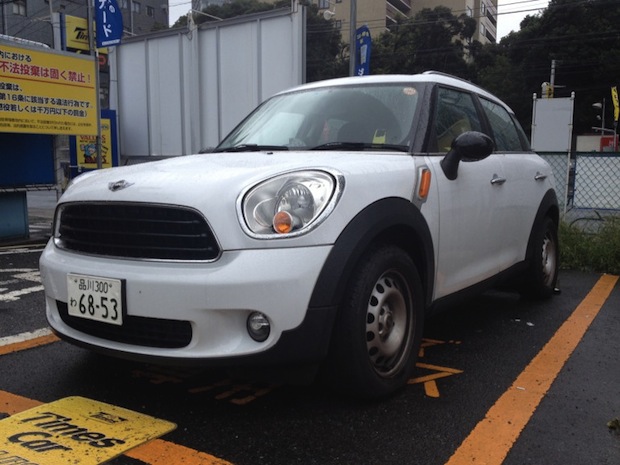 Times Car Plus is a service run by the company that operates the Times Car 24 parking lots which seem to sprout up on vacant land whenever a building gets demolished. There are literally thousands of locations dotted throughout the metropolis and beyond, so there is more than likely one nearby wherever you are in Tokyo. While the carparks are almost ubiquitous, not all of them have Times Car Plus cars available. Small parking lots may have only 1 or 2 cars while the bigger ones may have up to 10 or more cars available.

Although sign-up and reservation is all in Japanese (if you don’t read Japanese, you’ll definitely need a friend to help). When you sign-up, you’ll have the option of joining as a corporate member or as an individual. If you have your own company in Japan, you’re best to sign-up as a company as it’s cheaper. Individual membership fees are ¥1,030 a month while the company plan has no monthly fees. The individual plan however, does include ¥1,030 worth of free driving each month, so if you use it regularly it will balance out.

After you’ve entered your information in the website, you’ll be given a few options to complete the membership. The fastest way is to head to the one of the Times Car Plus offices with your Japanese driver’s license. If everything is OK, they’ll hand you your membership card – which you need to unlock the cars.

Reserving the car is relatively easy – even if you don’t speak much Japanese. Just install the Android or iPhone app, play with the map until you find a car nearby that meets your search criteria and then click the reserve button. This is where the system breaks down slightly – you’ll be sent to the mobile web page (which you’ll need to sign-in to) to complete your booking. When it’s time to pick up your car, head to the designated car park, put your card over the touch scanner on the back window and then climb in. The car will then start talking to you, telling you to remove the key from the device in the glove box. Then, you’re free to drive off. When you return it (to the same car park) you just do this in reverse. 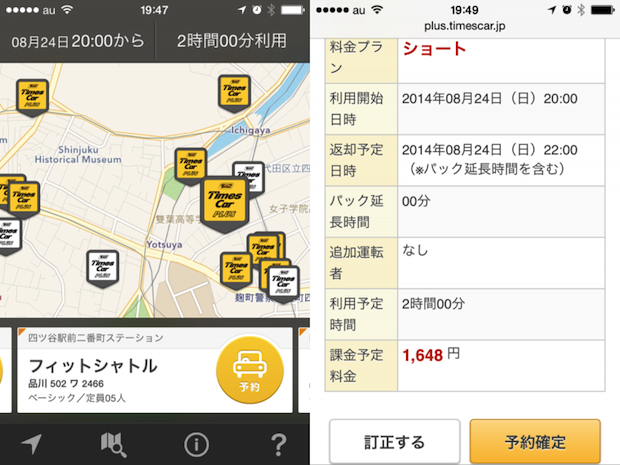 Using the map, you can find nearby cars that fit your search criteria, then book them.

Times Car Plus has a super simple system for charging. If you just want to grab a car and start driving, the cost is ¥206 for each 15-minute interval. So if you drive around for an hour, you’ll be charged ¥824. There are no charges for fuel or mileage. If you need to fill up, there is a fuel card attached to the driver side visor which you can use almost anywhere. If you do stop to fill up, they even give you a 15-minute free bonus. The ¥206 fee is for what they term “basic” cars – Suzuki Swifts, Mazda Demios and even larger Toyota Prius and Honda Fit Shuttles. If you want a “premium” car, the pay as you go fee is ¥412 for each 15-minute interval. The premium cars include BMW 116s, Mini One Crossovers, all electric Nissan Leafs (leaves?) and Audi A1s. However, if you reserve one of the longer time packs, you can get the premium cars for the same price as the basic ones. For example, if you get the 6-hour pack, you can choose any car you like and the total stays at ¥4,020. The only condition is that the premium cars are popular, so you should make sure you reserve early. 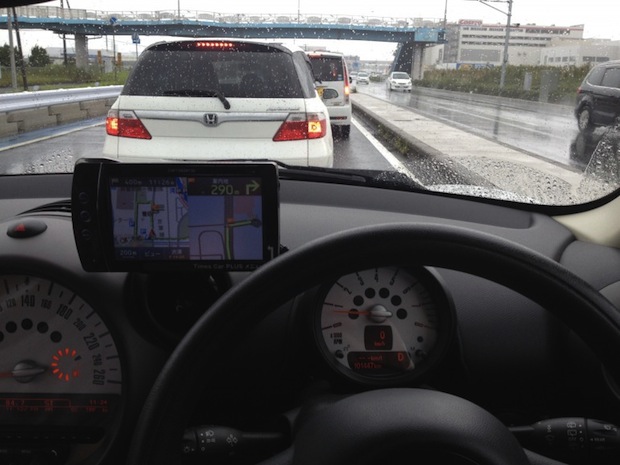 Nothing like a Chiba traffic jam to remind you how awesome the train system is.

After you’ve completed your trip, you’ll be sent an email summary of your trip – with surprising detail. Listed, is the total time of rental, distance covered, maximum speed reached (I hit 99mk/h), emergency accelerations (apparently I had two), emergency braking (zero) and any subsequent penalties. The fact that it records everything means you should think very carefully before opening up the throttle on a deserted country road. As the maximum speed limit in Japan is 100km/h, presumably if I had gone a few kilometres an hour faster, I would have incurred a penalty.

In addition to the 6 hour pack, there are 12-hour packs, 24-hour packs, early night packs, late night packs and all night (strangely termed “double night”) packs – each with a mileage component. They also run regular campaigns. For example, there is currently a whole weekend pack during autumn for approx. ¥9,000. Generally, for longer rental periods, you may find places like Niconico Rentacar to be better value.

It generally works really well. However, you are sharing the car with others, so you’re hoping that the previous occupants cleaned up properly after themselves. On my first experience, the car was spotless. On the second, it contained rubbish, empty drink containers, food crumbs and even two boxes of cigarettes – all of which I had to throw away. After you’ve returned the car, Times Car Plus sends you an email asking about the state of the car which gives you the chance to tell them that it contained rubbish – so presumably the previous driver will get a black mark against their membership or some kind of penalty.

The actual driving is more fun than I expected. Tokyo’s blade runner style road system with tunnels, multilevel bridges and elevated motorways taller than a 10-storey building and toll booths every 5 minutes can seem intimidating, but you’ll likely find traffic levels much lower to what you’re used to at home and finding your way around isn’t difficult at all. If you can’t use the Japanese sat nav system, Google Maps turn by turn instructions also work pretty well.

Car sharing has really taken off in Japan recently. In addition to Times Car Plus, there is Orix Car Sharing and a another company called Careco – both of which partner with other car park providers to offer similar services so if Times Car Plus is not available near you, these may be good alternatives. We hope to review both of these at some time in the future, so stay tuned!