While people make charitable donations for (arguably) many different reasons, this year, the annual 24 Hour Television themed “Love Saves the Earth” — which will be aired on August 24th and 25th — might give you yet another excuse to be genuinely generous to others.

Charity or even volunteer work is certainly not a common habit in Japan. One reason might be because the Japanese are so humble that they think they cannot be useful to others — or the more probable one is that the majority of people do not bother to take action themselves, thinking that someone else — not me or us — will do it instead. 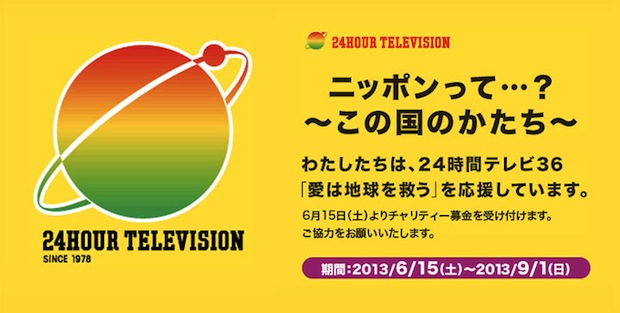 NTV’s 24 Hour Television is an annual telethon notoriously famous for spotlighting the physically challenged in a “sympathetic” light — an approach which has been harshly criticized by some as sheer hypocrisy. Unlike other telethons broadcast in different parts of the world, the purpose of this program is not so much to raise awareness of people in need of help, but to make its viewers look down on them as a group of completely powerless, voiceless people. In short, they think that we need a solid reason to be generous to others. (Personally, though, I don’t think we should condemn an attempt to support others regardless of their hidden intentions, if any.)

As part of the charity promotion, each year they design and sell their own charity t-shirts. This year, it’s a collaborative effort by Satoshi Ono from Arashi and the avant-garde artist Yayoi Kusama. The tees have already been on sale for 1,500 yen since June 14th and are available in four colors (pink, blue, yellow and white), representing four seasons in Japan (spring, summer, fall and winter) respectively.

Here are the pink and blue versions.

And the yellow and white ones.

Kusama is known for her extensive use of polka dots and psychedelic patterns.

As described in the clip above, she has managed to turn what many would regard as insanity into something worthy of our attention. We think that there is a thick and clear line between sanity and insanity, but is it really a THICK line? Or IS there any line in the first place?

The t-shirt is already kawaii on the outside, but as one individual who very much admires Kusama’s attempt to be borderless in every possible way, I would like to interpret this particular piece of work as a way to question how we see, treat and judge others who are different.

As I mentioned before, the 24-Hour Television telethon likes to focus on the “extraordinary” aspects of physically challenged people, yet at the same time promoting the message of “Love Forever”, which is printed on the back of the T-shirt, as a universal value.

For the majority of people, though, “Love Forever” is not an easy task. The fact that they are asking for love on national television in a predominantly non-religious country means love is a product of hard work. And if the message of “Love Forever” has become prevalent enough in our hearts like in mass-produced t-shirts, that’s when such a show should really become extinct — which is not likely to happen anytime soon.

All in all, the new t-shirts look worth the price… even without the charity concept.