Bandai’s Tamagotchi is one of those series that just continues to survive — and not only survive, but keep on innovating and coming up with new tricks.

Tamagotchi probably needs no introduction to any reader of a blog called “Japan Trends”. The digital pet was a phenomenon in the 1990’s, its egg shape as funky as its concept, and as addictive as pressing the three buttons. It first hit stores in late 1996 and has since sold over 78 million units.

Needless to say, the world of toys is a fickle one and subsequent Tamagotchi have been no match for the sales of the original, which was a global smash. The sea change led to maker Bandai over-stretching itself and posting large losses for 1998.

Bandai then went back to the drawing board and came up with enhanced Tamagotchi with more sophisticated functionality: new models to meet the changing times. Tamagotchi Plus had infrared communication functions (infrared was once a standard in many Japanese flip phones) and then Tamagotchi iD could interact with cellphones. The series underwent a further revival in 2011 with the release of a 15th anniversary model of the Tamagotchi iD L and this went on to shift around 500,000 units in 2011.

So, not quite the sensation it once was but still going strong. Not bad for a nation with a declining birthrate, and so less and less young consumers every year.

The latest Tamagotchi is the Tamagotchi 4U, which ups the tech by adding NFC but still looks as cute as ever. This allows the handheld pet to interact with “Touch Spots” that are located around Japan, plus with other Tamagotchis and devices. You can download new characters, clothes, items, and “collaborate” digitally. 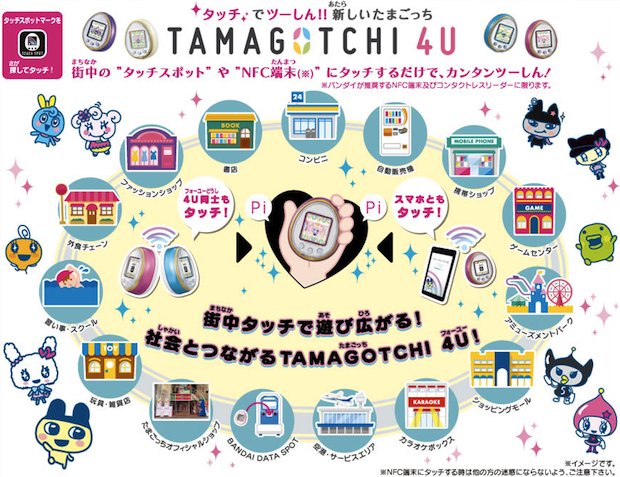 For example, go past a vending machine and pick up a “drink” for your Tamagotchi, or a “dress” at a clothes store.

Get your hands on the Tamagotchi 4U in September.