Batman spotted driving the Batpod on expressway in Chiba

August 25, 2014 by William
Comments Off on Batman spotted driving the Batpod on expressway in Chiba

Japanese social media has been abuzz with some amazing images of Batman driving in his Batpod along the highways in the Tokyo area. 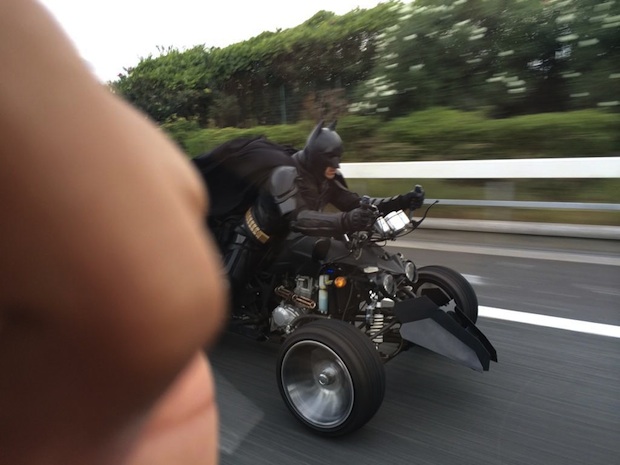 Okay, it’s not quite as good as it sounds. This “Batman” was spotted by motorists on the roads of Chiba, the prefecture next to Tokyo.

Some images of “Chi-battoman” (Chibatman), as he’s been dubbed, was snapped on Sunday afternoon and the images went viral on Twitter. All right, it’s not exactly Christopher Nolan but you’d still be impressed if you saw this Caped Crusader drive past you on the expressway.

We’d not sure how legal this Batpod is. At least at one point the driver attracted the attention of the police. Of course, cosplay (costume play) on the mean streets of Japan is nothing new.

In the past we’ve seen motorcycle parades zipping around Roppongi and Harajuku with quite spectacular results.

And if you want to drive around the city like you’re playing Mario Kart for real, you should check out Akiba Cart in Akihabara. It rents out go-karts that can be driven legally on regular roads. Not surprisingly, it attracts plenty of fun video game cosplay.