In 1998 the famous guitarist from pioneering visual kei rock band X JAPAN, Hideto Matsumoto (commonly known as just “hide”), suddenly passed away at the age of thirty-three. To remember this, every May Kawasaki Club Citta shows the film “hide FILM ALIVE!” 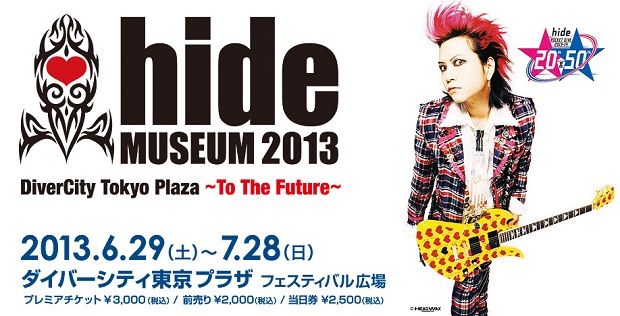 In 2000, two years after his death, a museum opened in his birthplace Yokosuka, which became a mecca for many fans from all over the world as well as Japan. This hide Museum was originally planned to be open for three years, but due to its popularity it didn’t close until September 2005. During those five years the hide Museum attracted about 450,000 visitors and now it is being reopened in Tokyo and Osaka for the first time in eight years.

In Tokyo, the hide Museum 2013 will be at DiverCity Tokyo Plaza from June 29th until July 28th, and in Osaka at Universal Studios Japan from August 7th to August 9th.

Each venue will display objects such as hide’s 1959 Gibson Les Paul Standard guitar, costumes from his music videos, the mask from the cover of his first solo album “hide your face”, and more, introducing hide’s music, art and lifestyle to his fans.

Two tribute albums with “hide TRIBUTE II & III Visual Spirits” will also be released with covers of hide’s songs by other visual kei artists and bands like Sadie, heidi., or Screw, priced ¥3,000 each.