In recent years makers like Bandai have been releasing highly sophisticated figure models with around 30 movable joints.

These can range from classic characters like Ultraman — a series still popular enough after all these decades for it to have its own customized guitar — to religious and traditional figures. 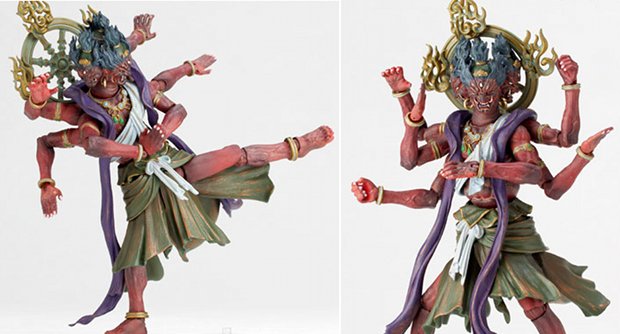 The idea is to have highly advanced posing potential so you can recreate scenes from the respective TV series, manga or films the figures come from.

To this end this new breed of Japanese action figures will have “effect parts”, allowing owners to produce special tricks such as jumping, clouds of dirt caused by landings, shooting flashes of light, and so on.

In a strategy that in most other countries would result in charges of blasphemy, famed figure maker Kaiyodo released some movable Buddhist figures last year, including Tamonten, which sold over 30,000 units — 1.5 times the target. They followed it up with Ashura and Jikokuten Buddhist diety figures. The owners are apparently mostly in their thirties and forties.

Sofmap Akihabara Honkan’s sales for figures from January to August last year were also up by 1.5, with a big increase in the number of these posable action figures as opposed to the usual shojo products stereotypically bought by otaku collectors.

A high school kid from Tokyo has been making a series of videos of his Ultraman action figures. Using no effects or animation, he has instead produced low-fi heaven with just the versatility of the poses the new figures allow.

This video alone has attracted over 300,000 views at time of writing.

That’s not to say there is anything anti-tech about this. A new piece of software called Qumarion allows you to link a mannequin and its poses to your computer through sensors in 16 places, creating a naturally moving figure on the screen.