October 12, 2012 by William
Comments Off on Japanese calligraphy robot show artificial arts of the brush

The folks at DigInfo have put together this nice report on a Japanese robot that can recreate the detailed brushstrokes of human calligraphy using a Motion Copy System.

While the whole get-up may appear rather crude, the Keio University-developed device can remember and reproduce delicate strokes right down to the force applied to the brush.

The professor behind the project explains:

We’ve succeeded in using the motor to record the movements of a veteran calligrapher, and to actually reproduce them. So, I think we’ve demonstrated that, to record and reproduce human skills, it’s necessary to record not just motions, but also how strongly those motions are made. 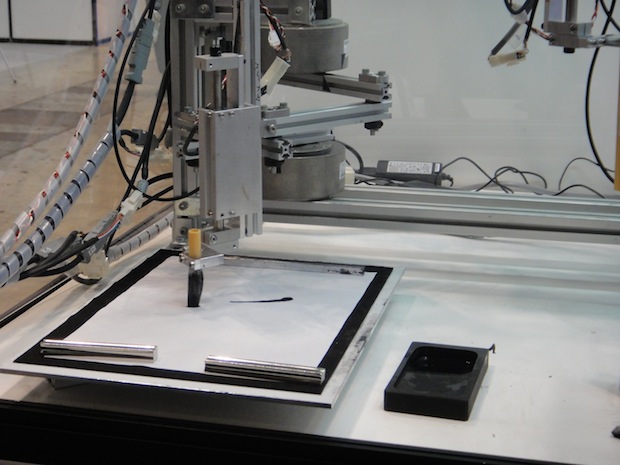 Given that a lot of traditional crafts and techniques in Japan are generational and need to be passed down to new artisans, this kind of robot may be one way to store ancient arts so that they can be re-learnt again in the event that younger disciples are not found to replace aging masters.

However, with something like calligraphy it is not only about method. There are also more ambiguous emotions behind the strokes and the feeling in the way the brush is handled. A machine or robot may be able to record the direction and pressure on the brush, but not the mood of the calligrapher or what was happening in their mind at the time of the creation process.

The results are an impressive “copy” but is it just technique, as opposed to something more instinctive, more, dare I say it, artistic? 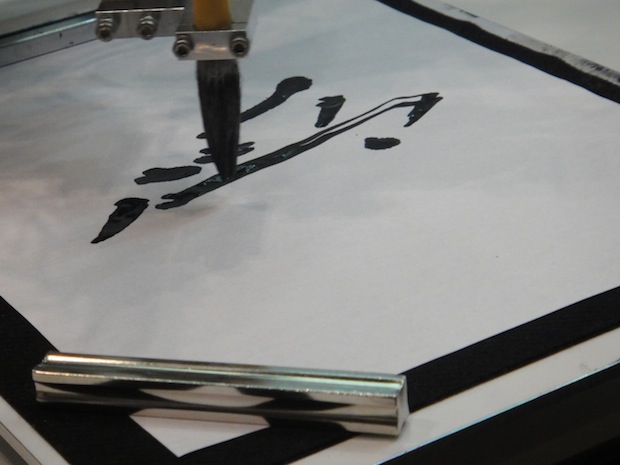 Talking of putting the “artifice” back into “art”, this reminds us of the robot “artist” created by So Kanno and Takahiro Yamaguchi in 2011.

And, while it doesn’t look as visually impressive, it seems that at any rate these people actually got there first with their smaller calligraphy robot.