In between pushing through a controversial secrecy bill and annoying its Asian neighbors, the Japanese government is hoping to combat the country’s chronic birth decline in a pretty unexpected way. 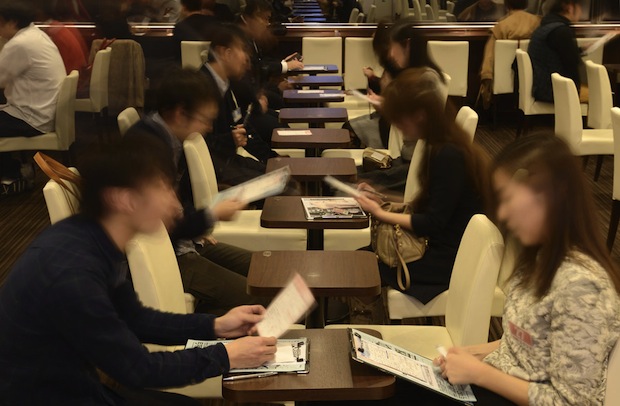 Yuriko Koike is one of Abe’s politicians leading the efforts to increase the fertility rate, currently a very poor 1.41 per woman.

Under the central government’s program, prefectural governments can apply for grants of up to 40 million yen for new projects to support marriage, pregnancy, birth and child-rearing. Party expenses are excluded from this allocation with participants paying for themselves.

The Kochi government plans to apply for help to set up a consultation booth for people seeking spouses. Ibaraki prefecture intends to use funds for projects such as improving its existing marriage-support centers.

The rise of spouse-hunting services — called konkatsu and closer to traditional matchmaking than the kinds of dating services popular in the west — has been a signature of the Heisei era in Japan, where uncertainty over social status and employment has created a less confident generations who wait much longer to get married, if they bother at all. This isn’t such a problem — in fact, it’s far better than the situation before where many marriages were still more or less arranged for people of a certain class — but it will put a strain on the social welfare system. More singletons and less babies means less money coming in and more going out on people with no dependents to cover their health costs. Japan is a demographic time bomb, set to lose a third of its population by 2060.

Funding konkatsu services is all very well. However, isn’t this missing the wood for the trees? The government is still reluctant to provide maternity and paternity leave and benefits on a par with European nations. One major factor that isn’t being addressed is that many women don’t want to get married and/or have babies because they know it will likely spell the end for their career. It is much harder to return to work and taxation literally makes the extra salary worthless after you have accounted for childcare expenses. And this is before we even start talking about the severe lack of kindergartens.