May 12, 2014 by William
Comments Off on Japanese man arrested for using home 3D printer to make plastic gun

In Japan, one of the most popular ways to use the technology has been DMM’s new service. However, with new technology and services, there are always going to be new gray areas to be navigated. 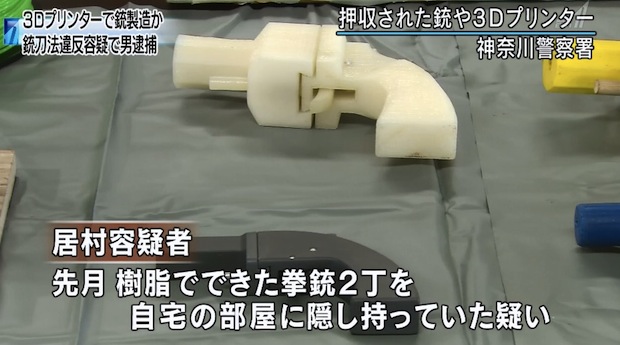 Yoshitomo Imura was arrested by police recently for taking his interest in firearms too far. He made a 3D-printed six shooter called the Zig Zag with his own 3D printer.

The Shonan Institute of Technology employee rather shot himself in the foot (not literally) by making a video of himself firing the gun and posting it online.

It is the first 3D printer revolver in the world which can discharge the live cartridge made in Japan.
In order to protect the law of Japan, the bullet for motion picture photography is used.
Please make in the United States. !!
If it makes, please show me a picture by e-mail.

The Japanese police are not famed for their investigative skills and for a good reason. Imura (27) actually printed the Zig Zag and fired blanks with it in a video posted 25 weeks ago! It was not until March when a video of the Zig Zag appeared on TV that the cops saw and decided to raid his home in Kawasaki, just outside Tokyo, where they found five firearms which could potentially be lethal.

While Japanese police have guns, it is very difficult for individuals to possess firearms in Japan, despite what Yakuza movies would have you believe. Manufacturing a firearm is an offense even if Imura did not fire live ammunition.

Imura has taken it as a sign of success that the police regarded his creations as real enough to take him into custody. However, in fact the plastic revolver may have been as much a danger to Imura as to others, since plastic guns can misfire, backfire and cause injuries to the user. On the other side, they can be brought onto planes and past metal detectors much more easily.

We expect this latest development will mean it is only be a short time until the authorities lock in legislation controlling 3D printers and 3D-printing services, as some lawmakers are indeed already threatening.