In post-Fukushima Japan, we need more projects like this.

While the LDP government slowly cranks up the return to full nuclear power, some Japanese corporations are being more realistic about the future. One of them is Kyocera, which has built the Kagoshima Nanatsujima Mega Solar Power Plant at a cost of $275.5 million.

The solar power plant is Japan’s largest and has a capacity of 70 megawatts. That’s enough to power some 22,000 Japanese homes (which are typically a bit smaller than American or European ones).

According to Kyocera, the plant “is being operated by a special purpose company established by Kyocera and six other companies to sell the electricity to a local utility under Japan’s feed-in-tariff (FIT) program.” 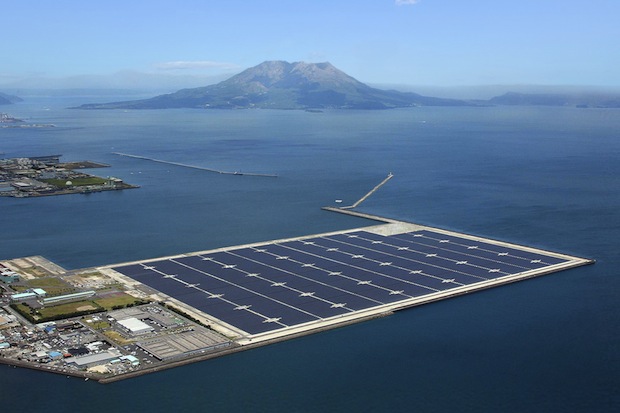 The Kyushu facility covers an area of 1,270,000m2, roughly the same area as 27 baseball stadiums.

Expectations and interest in solar energy have heightened to a new level in Japan with the need to resolve power supply issues resulting from the Great East Japan Earthquake of March 2011. To further promote the use of renewable energy, the Japanese government launched a restructured FIT program in July 2012, which stipulates that local utilities are required to purchase 100% of the power generated from solar installations of more than 10 kilowatts (kW) for a period of 20 years.

Kyocera is also being savvy about the PR advantages of being a green pioneer in Japan, not to mention how it can tie in with regional tourism, a formidable money-spinner. That’s why it is promoting the site not only for its long-term eco implications but also its own intrinsic value as a visiting destination for technology buffs (of which there are more than a few in Japan) or even sightseers hoping for good views of nearby Sakurajima.

Additionally, a tour facility has been built adjacent to the 70MW plant — which is open to the public — featuring a circular viewing room where visitors can observe the 290,000 solar panels from an elevated vantage point and enjoy the view of the ocean bay and grand Sakurajima volcano in the background. Display zones for visitors such as students and tourists provide information about environmental issues and the science behind photovoltaic energy generation. By dedicating this facility, all parties involved hope to foster a deeper understanding of renewable energy and further facilitate a low-carbon society.

Let’s hope that vision isn’t too far away.

"Song for Japan", the TV Singing Contest for Foreigners: How genuine is it, really?