February 2, 2015 by Tokyo Cheapo
Comments Off on Michelin Star Dining on the Cheap: Kyourakutei

This article by Liz Shek-Noble first appeared on Tokyo Cheapo.

The Michelin Guide is one of the most respected and famous systems for rating restaurants and hotels across the world. Gaining a Michelin star can instantly propel a chef from the depths of obscurity into the light of stardom, while a loss of a star or two can lead to spectacular breakdowns. Take, for instance, the highly publicised loss of two Michelin stars for Gordon Ramsay’s Manhattan restaurant, Gordon Ramsay, in Michelin’s 2014 NYC guide. The notoriously hot-headed and sewer-mouthed cheftainer reportedly broke down in tears following the news, claiming that the feeling of losing the stars was like “losing a girlfriend” or “losing the Champions League”.

Putting aside the pressure that can spring from a particularly biting review, it’s clear that the Guide continues to be a barometer of excellence in food preparation, technique and presentation. The underlying assumption, however, is that dining at these restaurants will be out of reach for many customers due to astronomical prices. That said, many Michelin star restaurants have lunch menus that offer similar dishes to what is normally served at dinnertime, but for just a fraction of the cost. And with Tokyo boasting an incredible 267 restaurants with at least one Michelin star, there’s no better time to find cheap Michelin star restaurants in Tokyo. Why not begin your journey into the cheap and cheerful world of fine dining with a steaming bowl of soba or some freshly made tempura at the Michelin-starred restaurant, Kyourakutei? 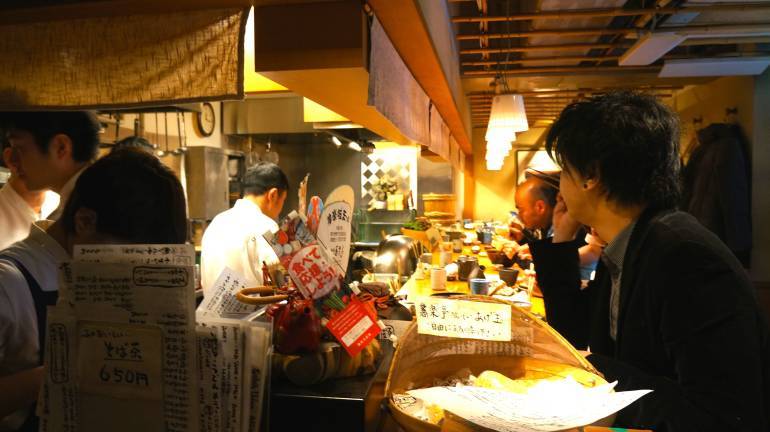 Winding through an alleyway off Kagurazaka-dori, I find myself at the front door of Kyourakutei at the spritely time of 11:15 am on a windy Saturday morning. I step into the restaurant and the atmosphere immediately changes; it’s almost like a hidden grotto, studded with assorted knick-knacks and lighting that is used to create warmth and depth in this small space. I sit at the counter and watch the chefs as they slice, dice and chop their customers’ meals with relaxed yet sparing motions. 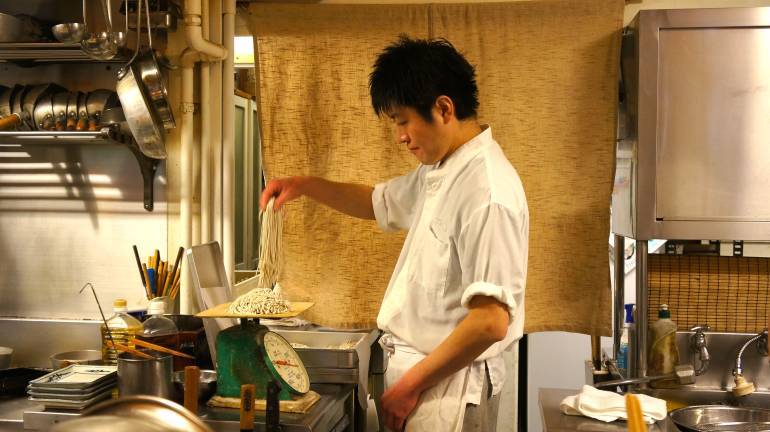 Kyourakutei, as a soba restaurant, specialises in the art of making noodles using these grain-like seeds sourced from Aizu in Fukushima prefecture. Unlike other restaurants, Kyourakutei has its own millstone, ensuring that its noodles are freshly milled on the day that they are served. Kyourakutei, however, also has a reputation for making tempura that is unbelievably crisp and delicate. Looking down at the extensive lunch menu (available in English), I decide to have kamo zaru (¥1,600) and a selection of tempura, so as to not miss out on either of Kyourakutei’s specialties. Some other interesting dishes include tsuke care (cold soba dipped into a hot curry soup — ¥1,100), kake soba with seasonal vegetables (¥900), and cold/hot soba served with tiger shrimp, eel and vegetable tempura (¥2,400). 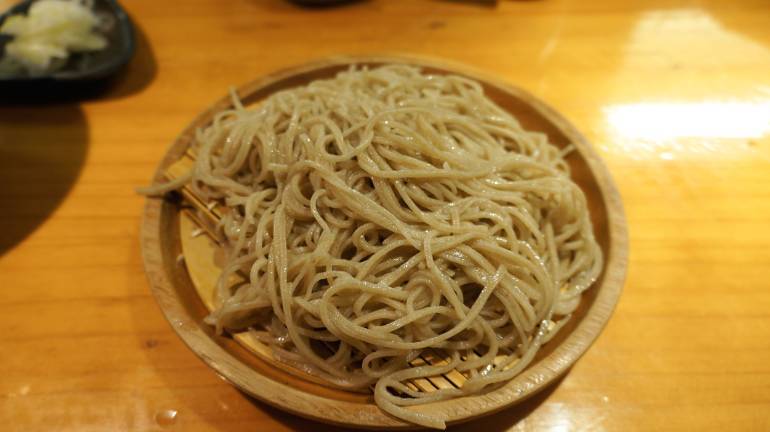 The kamo zaru is brought to me quickly, a palette of cold soba accompanied by a hot broth of duck and naganegi. As expected, the soba was impressive, due to the consistency in texture, as well as size and length, of the noodles. When dipped into the broth, the soba took on its soy and dashi flavours, while retaining its signature springy texture. The broth itself was earthy and mellow, and the duck meatball impossibly tender. My only complaint was that I expected more than one slice of duck and one meatball in my meal. 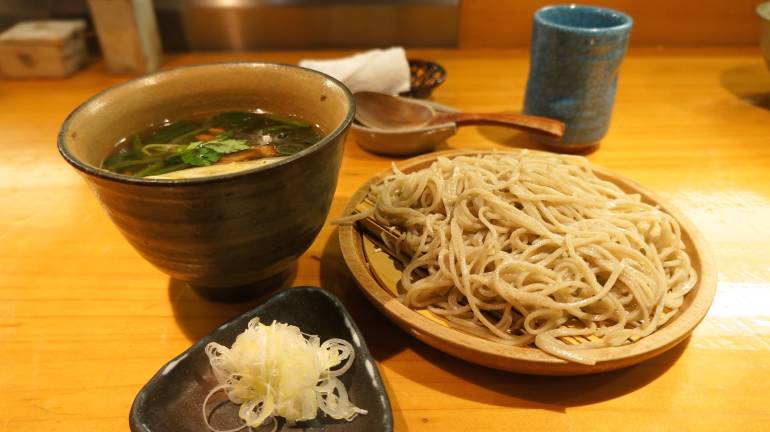 Being seated one foot away from a box overflowing with fresh vegetables and wedged between two customers inhaling their kakiage, I was never intending to leave Kyourakutei before trying some of its tempura. With this in mind, I settled on two tempura choices, maitake mushroom and tiger shrimp. 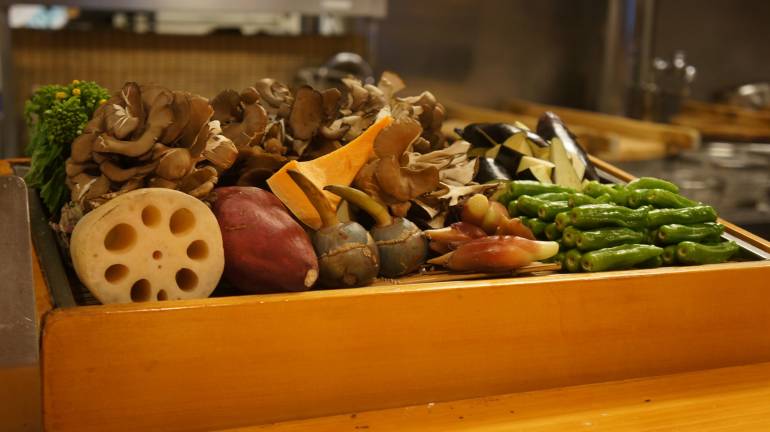 The tempura came out to me arranged on a plate as if carefully fallen on top of it. The batter was so light that only slight force was needed to bite through to the sweet and plump shrimp contained within it. The maitake mushroom was a robust counterpart to the shrimp, having a firmer texture and woodiness that recalled the forest rather than the sea. 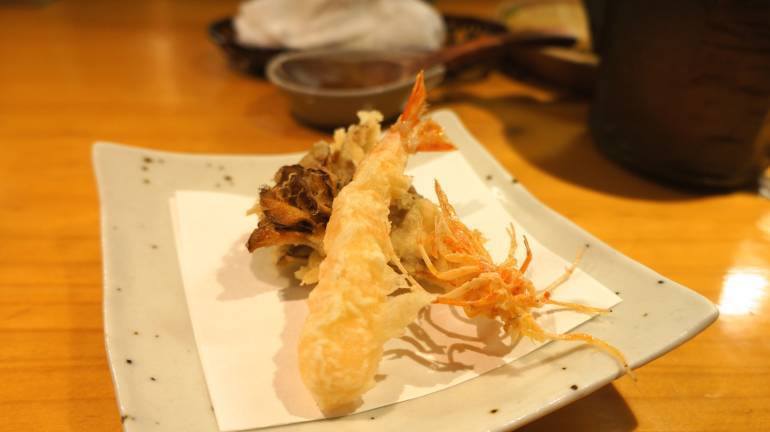 Walking out of Kyourakutei, I was fully satisfied with my meal, and perhaps even more so after noting how little it had cost me to dine at this Michelin-starred restaurant. Kyourakutei’s reputation is well deserved and evident in the long queues that the restaurant attracts both on weekdays and weekends. Do yourself a favour and head to Kyourakutei as soon as you can. Just make sure to get there early to avoid waiting in line out in the winter cold. 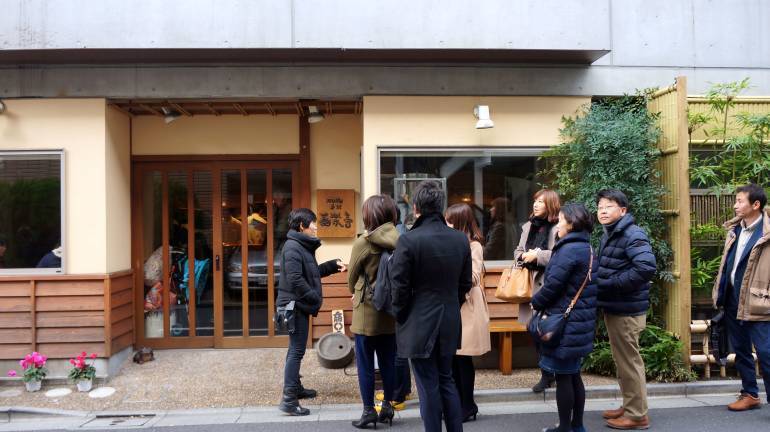