November 2, 2018 by William
Comments Off on Shibuya to consider relocation to Yoyogi, charging entrance to street party after Halloween mayhem

The morning after the night before begins in earnest now, as Tokyo’s Halloween craze faces a setback.

Following the events of Saturday, which saw five people arrested and chaotic scenes in Shibuya’s Center Gai shopping street where a truck was overturned by revelers, and then the night of Halloween itself, when a further 13 were arrested for groping, theft, and other offenses, now attention turns to the authorities to see how they will respond. (There was also a rooftop fire in the area, though this was not seemingly connected to the street party.)

Naturally, when tens of thousands of people in and out of costumes descend en masse onto one district, which is already a narrow and constricted urban space, there will be problems, as Shibuya anyway experiences most weekends with its regular bottleneck of shoppers and clubbers. Despite some well-intentioned volunteer trash collectors (including many in costumes), the amount of garbage generated by the street parties is immense, even by the standards of Shibuya’s Center Gai (which is never a clean place at the best, or quietest, of times).

The police presence was heavy on October 31st, with riot police officers backed up by vehicles as well as the now-famous “DJ box” where officers exhort the crowds to move along and behave.

In addition to police, local businesses are also exasperated by the popularity of the street celebrations, which results in damage and noise until the early hours, and prevents customers from using their establishments.

Mayor Ken Hasebe, who is overseeing a gargantuan redevelopment of the Shibuya Station area as well as the reconstruction of the Shibuya ward office, had called for revelers to restrain themselves ahead of the main weekend. When this was apparently ignored, his anger was public and he has come out with suggestions as to how Shibuya may curb the growth of Halloween celebrations in the district.

According to press reports, Shibuya is now considering levying a fee and organizing an event in Yoyogi Park instead of allowing people to wander around Scramble Crossing and Center Gai. Quite how that will stop people from gathering in Center Gai or the Hachiko area is unclear at this stage, especially given that the “authorized” street party is only recent and begrudging after starting first as a kind of flash mob several years ago. No doubt this kind of gathering will continue even if Hasebe organizes an “official” party in Yoyogi Park. However, Hasebe has indicated a tough stance by hinting at the possibility of facial recognition technology being used in the future.

Halloween 2018 will certainly be remembered as a turning point, when the mainstream press and authorities treated it as something that was more antisocial and problematic than fun and positive. Some might say that the young ‘uns only have themselves to blame, while others could counter that it’s really only a small minority out of the tens of thousands who attend annually. One interesting response on social media suggested that the roots may lie in the fact that people do not view Shibuya as a place that “belongs” to them in the same way that Ginza or Kabukicho do, even if you are not a local resident. The constant cycle of redevelopment and construction in the district has erased any sense of identity or community atmosphere about it, leaving it merely a vacuous space to be visited, exploited (and trashed), and then abandoned.

Whatever the causes, the days of Halloween tolerance in public space in Tokyo may well be numbered. 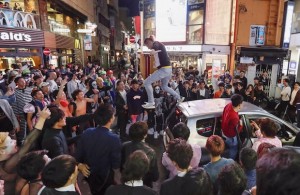