December 1st marks the beginning of job hunting for all college students across Japan currently in their third year of study. They are expected to graduate in March 2015, and start their jobs in the following April. Over the past few decades, many companies have either decreased the number of hires or abolished the entire recruitment system of new graduates. The new recruits who get job offers in this process are called shinsotsu (literally, “new graduates”) and in most cases considered the ultimate “winners” of a long academic competition, as they secure their seats in a company a year before actual graduation.

For them, job hunting is a continuation of the dreadful college admission system, yet the great majority start their career without knowing what to expect. Some of them end up sending their applications to more than a hundred companies, in a desperate attempt to get the offer of permanent employment which still remains the most respectable social status in Japan.

For companies, this is a great chance to pick the most potentially competent students out of hundreds of applicants. While permanent employment itself is gradually losing its appeal, as many companies can no longer afford the system, job hunting is the final stage of college education which completes four years of academic life and leads to a new start in the real world of work.

This year, some companies are taking different approaches. Dwango, a major IT company, has announced that they will charge an application fee of 2,525 yen (the amount here — nigo nigo — by the way is a pun for their video streaming service Niconico Douga) to anyone wishing to get a job in the company as a new graduate of 2015.

Why would anyone pay to get hired, you might ask. Yet this is the exact reason why they decided to charge all applicants, making sure that Dwango is the company that they really want to work for. In other words, the application fee is the first question that they face, in the long process of recruitment – is it worth the money? Am I serious enough to apply to Dwango?

In terms of physical commitment, job hunting has never been easier. With the simple click of a button, we can apply for multiple jobs at multiple companies. If the 2,525 yen fee scares away a few dozen of people who swear that they would never go near Dwango’s services ever again, that’s completely understandable. The new rule applies only to those living in the so-called metropolitan areas (the four prefectures in the Kanto region): Tokyo, Kanagawa, Saitama and Chiba. All the money collected from applicants will be donated to an organization (which has not been decided yet) that hopefully helps young students keep up their motivation to live through the recession believing there is still light at the end of the tunnel.

But the story doesn’t end here. Bark to Imagine, a startup company, has announced that they will do the exact opposite of what Dwango imposes on young applicants. Shuhei Ezaki, the company CEO, is offering a reward to “thank you for applying to such a small venture company like us”, promising to pay 2,525 yen to the first 25 applicants who make it to the first interview with him. 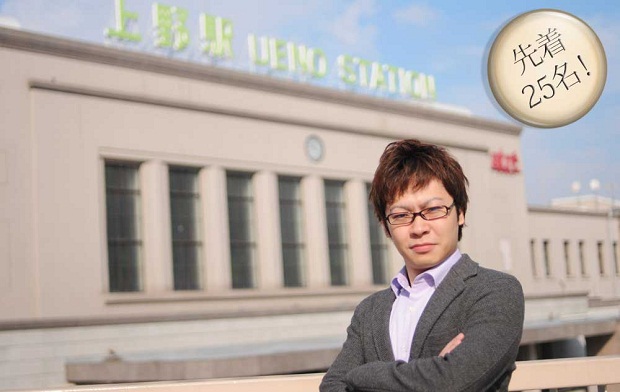 He says that a small startup has to call attention to itself and more importantly, the annual recruitment of new graduates is a chance for them to reevaluate their business from the perspective of someone who’s about to make one of the biggest decisions in life. Is our company worth working for?

The 25 applicants will be asked to have their pictures taken to be posted on the company website with their names. Yes, there is indeed no such thing as a free lunch, but there’s also no gain without risk either, right?