Former Tokyo governor Shintaro Ishihara launched his new political party yesterday, The Taiyo no To (The Sunrise Party), ahead of the Lower House elections anticipated to be held soon.

The name and the logo are clearly milking the nostalgia that has kept Ishihara popular with Baby Boomers and still in office after all these controversial years.

Ishihara wrote a (very bad) novella in the Fifties called Taiyo no kisetsu (Season of the Sun) about young rich brats fooling around on Shonan beaches, boxing, drinking and chasing skirt. 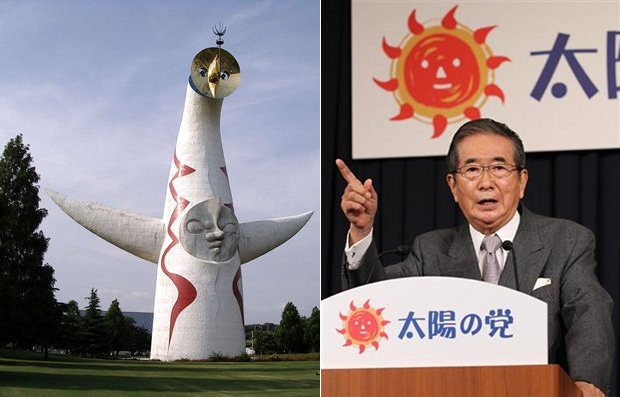 It made its author a star, as well as his brother, who starred in the movie version. Together they became icons of the so-called Taiyo-zoku “Sun Tribe”: happy-go-lucky dandies laughing in the face of post-war austerity.

The same generation who lapped up the “rebellious” frolics of Season of the Sun then enjoyed the fruits of Japan’s economic and cultural recovery, seemingly crowned and symbolized most neatly first by the 1964 Tokyo Summer Olympics and then by the World Expo in 1970, held in Suita, north Osaka.

The visionary event, until recently the most attended and successful World Expo ever (over 60 million visitors!), was overseen by such people as artist Taro Okamoto (a political opposite of Ishihara) and architect Kenzo Tange.

Still standing in the Osaka park today is the Tower of the Sun (pictured above, left), Okamoto’s incredible ethnographical and quasi-primitive toten pole, and one of the most famous of the expo’s many structures and exhibitions. 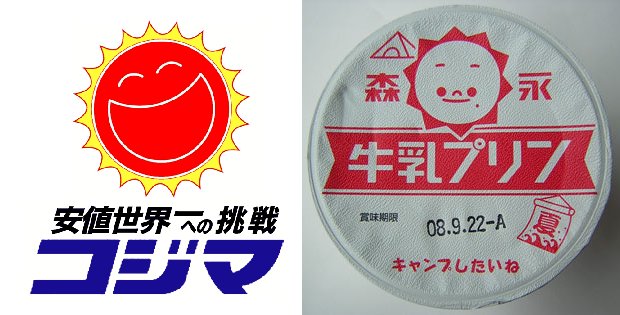 Ishihara’s party’s logo seems to be a rather faux copy of Okamoto’s design and has already come in for particular criticism from Japan’s netizens, with many seeing the obvious similarities with the Tower of the Sun, not to mention Kojima, a discount electronics store, and even a packaging for a Morinaga yoghurt.