A long time ago, long before we had augmented reality toys or flying gadgets that interacted with your smartphone — long before even anime had really got going and brought with it the toppling mountain of tie-up merchandise… there were other ways to keep kids amused.

Japanese children in the years after the war had tin toys to entertain themselves with, not least of which the beloved ones made by Horikawa.

Most famously Horikawa made tin robots, such as the iconic Star Strider. 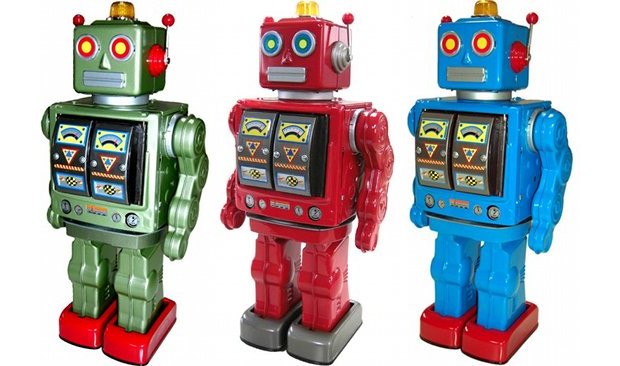 Readers who reside in Japan may have seen these kinds of toys in stores that stock unconventional or deliberately off-beat products, like Village Vanguard. You may have wondered what ancient anime they were spin-offs from. Actually, these robots are stand-alone delights and we love how they move!

Horikawa made loads of these kinds of tin (buriki) toys. Sadly, the times were a-changing.

The company went out of business in the Eighties but its heritage was taken up by Metal House, another company and originally a Horikawa sub-contractor, who have been doing their best ever since to keep manufacturing tin toys for new generations.

It’s a tough racket, given that even mega-hitters like Takara Tomy have struggled over the years (hence why “Takara” and “Tomy” joined together) and a cynic might carp that it is all in vain, given the nation’s declining birth rate.

Well, Star Strider robots are still around and frankly, we think these moving, buzzing, flashing ‘bots, while not quite in the realms of the Robi or Honda ASIMO, are nevertheless pretty cool — cool enough that adults, especially the hipster retro-lovin’ variety, would also definitely like them.