Shinto, the native Japanese (quasi-?)religion, has never been averse to merchantile environs. Major corporations have their own shrines (jinja) and department stores may often have one on their roofs. No Jesus cleansing the traders out of the temple in this religion, that’s for sure.

Until Valentine’s Day, Tokyu Hands Hakata (Fukuoka) is also showing no qualms about bringing a jinja into the “den of thieves”.

In the store visitors will find a torii gate like the kind you pass through at the entrance to a Shinto shrine. The heart-themed design of the fake shrine is a copy of the actual Koinoki Jinja, the shrine for lovers located elsewhere in Fukuoka prefecture.

At the “shrine” you can buy a love fortune (omikuji) for ¥100, write a message and then post it on the heart-shaped board. At the end of the promotion, all the “offerings” will be collected and taken to the real Koinoki Jinja.

The same area of the store has also been holding chocolate-making workshops for those girls who want to give something unique on February 14th (in Japan, the women give the men something on Valentine’s Day, and then the men return the favor on March 14th).

Other than Koinoki Jinja, shrines famed as places to acquire fortune in romance include Kuzuryu Shrine, near Mt. Fuji, and Kasuga Taisha in Nara. Tokyoites can console their lonely hearts by heading to Imado Jinja in Asakusa or Tokyo Daijingu in Iidabashi. 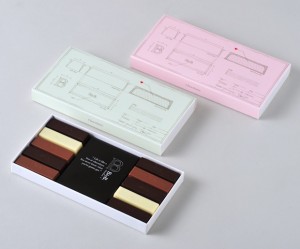