Yoshimoto Kogyo, one of the biggest entertainment companies in Japan, will host a one-of-a-kind talk show in Shibuya in September, featuring a group of hafu comedians. 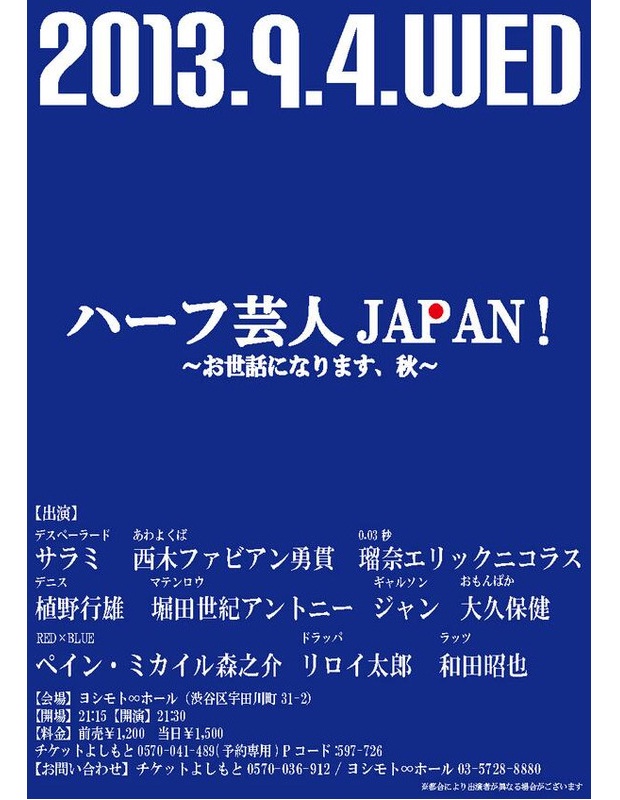 The theme of the “Hafu Comedian Japan!” show on September 4th is to spotlight ten Yoshimoto comedians, one of whose parents is non-Japanese.

The word hafu (or haafu) is, of course, derived from the English word “half”, i.e. 50%. But when the Japanese use the word to refer to a person, they simply want to point out that he or she is “half something else“, and the other half of their identity is almost always (though not in every case) assumed to be Japanese and thus not mentioned.

Below you can see two of the Yoshimoto comedy duos, Denis (on the left) and Matenrou (on the right). Yukio Ueno of Denis and Antony of Matenrou — both on the left respectively — are hafus. They will be at the show to talk about their everyday experience of being hafu in Japan, which in most cases is making self-deprecating jokes. But if you listen closely to their stories, some of their anecdotes can very well be seen as a series of everyday encounters with people imposing certain images of the unknown “otherness.”

For example, Ueno is half-Brazilian and half-Japanese. He says that he is an easy target for the police, who stop him on a regular basis. On another occasion, when he went to an izakaya with his friends, his otoshi (appetizer brought automatically to each customer’s table) was popcorn while everyone else got kiriboshi-daikon (dried shredded radish), an appetizer that is very “Japanese”.

Antony, on the other hand, often talks about how he has failed to meet people’s expectations throughout his life. Just the fact that he cannot speak English seems to surprise many, including foreigners in Japan, who approach him without ever thinking that his mother tongue could be Japanese.

While some hafus such as these comedians turn their experiences into entertainment for the rest of Japan to see and enjoy, there are other approaches to highlight mixed-race people in Japan. This film “Hafu” has already been out there for a while and will finally have its first screening in Japan on October 5th at Uplink in Shibuya, Tokyo. 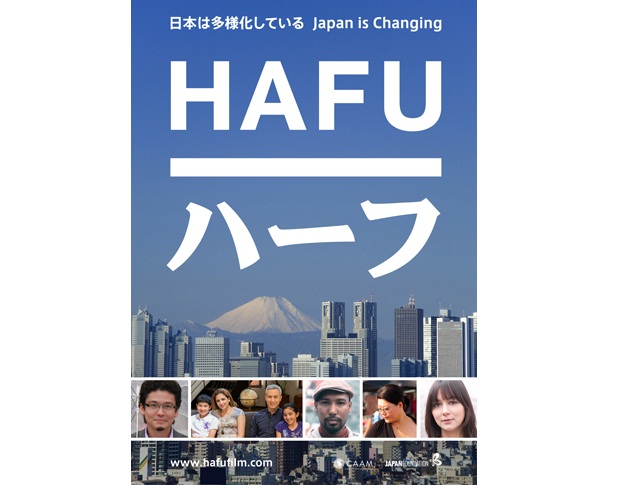 The film features four hafus and one family whose kids are of mixed race. It’s a sociological attempt by two filmmakers, Megumi Nishikura and Lara Perez Takagi — both hafus themselves — to answer the questions of what it means to be hafu and/or Japanese and how such experience defines and shapes Japan. Here’s the official trailer.

Of course, there are more variety of hafus in Japan than what the above Yoshimoto event and this film can cover, but the fact that hafus in Japan still stand out a lot tells us that it might depend on one’s willingness and perhaps courage, too, to accept and embrace the difference.