Zexy and comedians cheer up rainy season gloom with weddings

June 10, 2013 by Mina
Comments Off on Zexy and comedians cheer up rainy season gloom with weddings

Weddings and konkatsu (or spouse-hunting) are big money in Japan. June Bride is a term that originated in the west but later became a commercialized concept in Japan too. However, June in Japan, as we know, has historically been the gloomiest month of the year, due to the fact that it coincides with rainy season.

In the wedding industry, people have been trying to find a way to boost sales during this unhappy time, and apparently have decided to borrow some luck from the west. This time, though, they are adding a taste of comedy to the marketing — maybe that’s what we were all missing!

To celebrate its twentieth anniversary, wedding magazine Zexy has recently released their latest TV commercial series featuring thirty male comedians. In the fifteen-second commercials, each of them acts out their ideal marriage proposal scene. 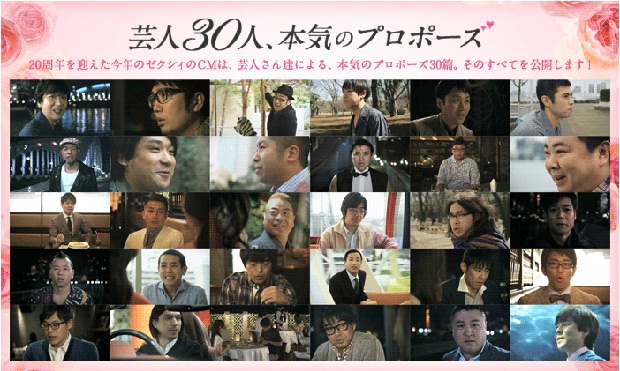 Surprisingly there is nothing comical about their performance. Some are married in real life, and others are not. They all look serious when proposing to their future wife, who is played by Airi Matsui in all the versions, yet the ending adds a bit of twist to the scene, showing them slightly incongruously with a Zexy magazine, implying (not so subtly) that Zexy is the perfect wedding guide.

Here are my three favorites. I chose them solely on the basis of the wording of the proposals, regardless of whether or not I like the acts as comedians.

Eiji Kotoge (Viking): I used to be thinking only about myself, but now I’m always thinking about you.

Akihiro Kakuta (Tokyo 03): I want to introduce you to my friends as my wife.

Personally, though, given that the guys are all comedians, I wish they had added a bit more humor. Otherwise, there probably isn’t much need for a lengthy proposal when a simple “Will you marry me?” would suffice in most situations.

What do you think? Do Japanese comedians make you want to get married in the rainy season?