Eyelash art and paper lashes getting more popular in Japan

November 1, 2012 by William
Comments Off on Eyelash art and paper lashes getting more popular in Japan

We’ve seen it around for a while overseas but we just read an interesting report about how so-called eyelash art is apparently starting to pick up more adopters among Japanese women in their twenties and thirties.

The British brand Paperself is now being imported and sold in Japan. Inspired by Chinese paper-cutting techniques, the paper eyelash designs include animals, flowers and other motifs.

For a country as obsessed with make-up and with paper (origami et al), this should not come as a surprise.

With the spread of “gyaru” fashion to mainstream Japanese women from around the year 2000 these kinds of elaborate and striking cosmetic decorations have started to gain in popularity. Regular OL fashion has been veering towards the casual for years now, alongside the spread of items to enhance your “eye power”.

The Nikkei Marketing Journal introduces some examples of women who are now trying matsuge aato (“eyelash art”) for wedding parties and special occasions, like Halloween. Japan, with its culture of cosplay and imitation, means there is a ripe market here for this kind of cosmetic product. Plus Japanese people frequently seem concerned about how “small” their eyes look and go to lengths to give emphasis and “oomph” to the impact their eye make-up can create.

The eyelash market reportedly went from 22 billion yen (nearly $300 million) in 2006 to 50 billion yen (over $600 million) three years later.. Some local printing companies have started to offer new paper make-up products, such as paper eyelashes and paper eyeliners. One such manufacturer launched the PaperMake1 online store recently with some 26 examples of paper eyelashes. 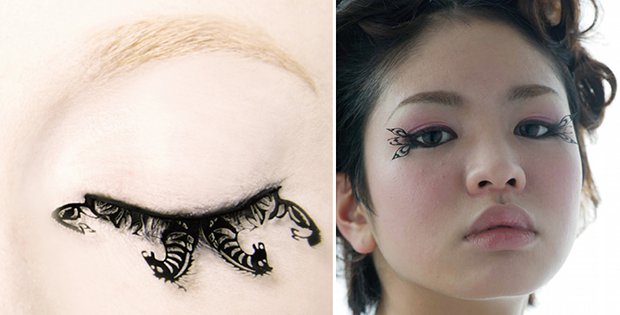 Most are indeed delicately made from paper but other companies are offering cheaper products made from low-cost polyester.