September 16, 2013 by William
Comments Off on Much ado about nothing? Japanese government protests French satirical Olympics cartoon

Japan has got its knickers in a twist over a French newspaper’s satirical cartoon that shows two emaciated wrestlers facing up for a bout in the 2020 Tokyo Olympic Games with the Fukushima reactors ominously in the background. A commentator is saying, “Thanks to Fukushima, sumo has become an Olympic sport.”

Le Canard Enchaine poked fun at the announcement that Tokyo would be hosting the 2020 Olympic Games. The sumo wrestlers have extra arms and legs. 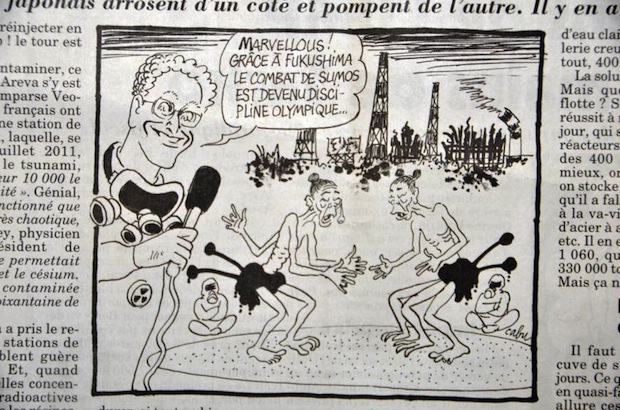 The Japanese government is said to be very upset over the “regrettable” satire and plans to make a formal complaint via the Japanese embassy in Paris.

“This kind of cartoon hurts the feelings of those who suffered in the disaster and gives an incorrect impression of the problem of contaminated water at the Fukushima No. 1 power plant,” said Chief Cabinet Secretary Yoshihide Suga in Tokyo. 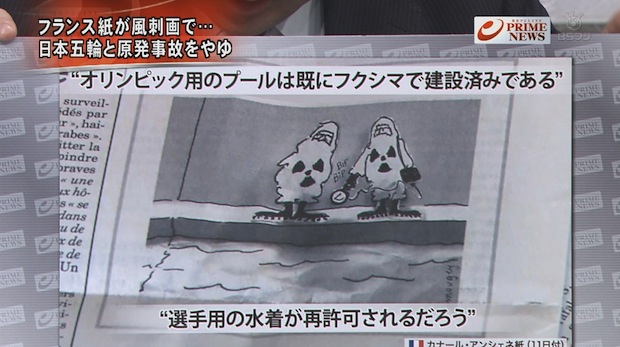 During the final Olympic bid’s presentation on September 7th Prime Minister Abe claimed that the Fukushima leak in the sea was “under control”. The wording of his claim has since been contradicted even by TEPCO and it seems obvious to all that the leader’s bullish statements were disingenuous to say the least.

We would argue that, more than a French cartoon, Abe’s over-confidence — or bald-faced lie — is more upsetting to those who suffered in the disaster, not to mention the hypocrisy of the PM now claiming to take responsibility for the region’s problems only when it was crunch time for the Olympic bid.

France was one of the most vocal countries at the height of the Fukushima crisis and was accused by some of alarmism when it told its citizens to flee Japan. Though in the end Tokyo was never in danger, its strong reaction to the disaster seems in hindsight not to be so disproportionate given that, approaching three years after, we are still seeing massive radiation leaking out from the crippled plant.

One issue here is that satirical cartoons are not common in Japan so people are not used to such caricature in the media. Le Canard Enchaine is not anti-Japan but it is here exposing the farce of the authorities, and their failure to truly deal with the problems. 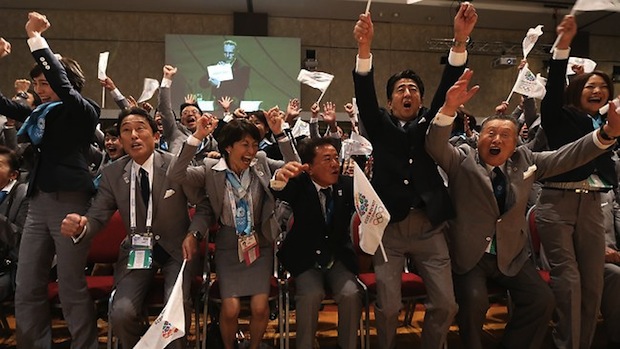 The Japanese government is overly sensitive to foreign jokes and pokes from overseas media. There was a similarly ridiculous and pompous response when British comedy quiz show QI used the example of double A-bomb survivor Tsutomu Yamaguchi (“the unluckiest man in the world”) in one brief section of an episode in early 2011. Although it was perhaps insensitive and dangerous to bring up the tricky subject of nuclear war in what is essentially a light-hearted show — but what is the job of comedy if not to be daring and break taboos? — the actual butt of the quips made by the show’s panelists was British rail service. It was a case of a joke lost in translation.

France’s media has been particularly bold in criticizing the Olympic decision. A program on TV channel France 2 showed a doctored photo of Eiji Kawashima, the goalkeeper of the Japanese national football squad, with four arms. The joke was that a “Fukushima effect” had allowed him to be such a good goalkeeper in Japan’s shock defeat of France.

With tens of thousands still living in temporary housing in Tohoku, there is a bitter irony in Tokyo spending millions on developing its bay area for an Olympic Village and other facilities for its citizens to revel in the festive euphoria of the Games.

Here are some examples of temporary housing. 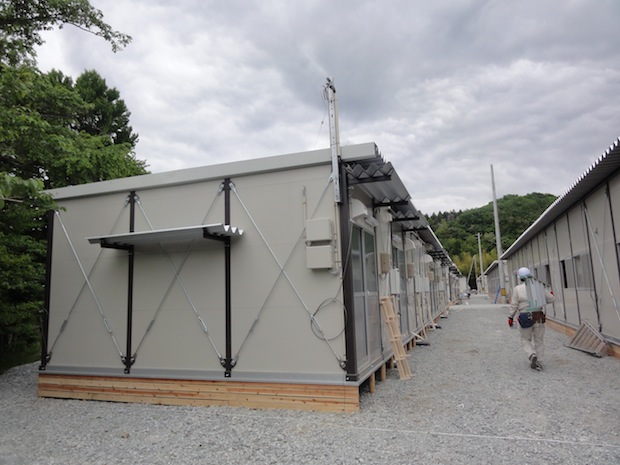 Here is what the Olympic Village will look like. 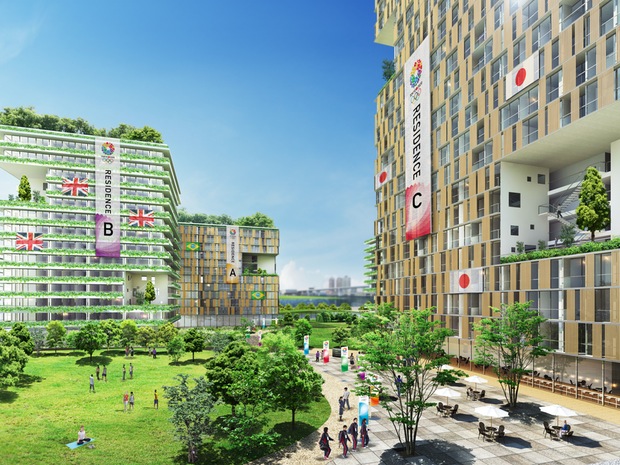 Which would you rather live in?