May 24, 2013 by William
Comments Off on GU’s fashionable flash mobs and other guerilla promos

GU (pronounced “gee-you” — a play on jiyu, meaning “free”) is the off-shoot of UNIQLO that is even cheaper and even more casual.

GU branches have been popping up around major city centers recently and as part of its expansion, it has launched a series of guerilla marketing schemes to pull in the crowds. 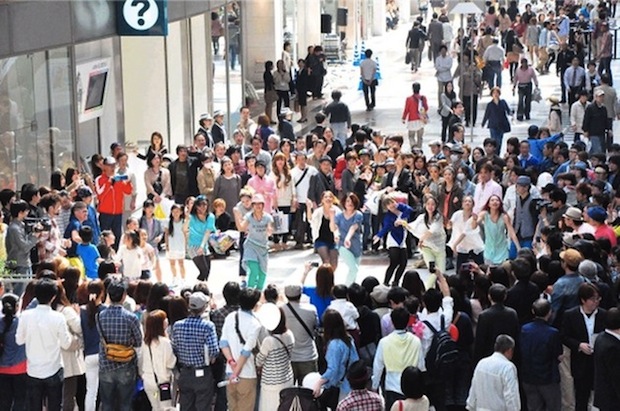 These include flash mob events, fashion shows with “living” show window mannequins, and more. It was also one of the sponsors of the Kawaii!! Matsuri 2013, which prominently featured GU’s official model, Kyary Pamyu Pamyu.

Since GU’s line is meant to be clothes worn by laidback fun-loving youngsters, in Kobe it decided to hold a “fashion dance battle” with teams of kids.

Meanwhile, in Hakata (Fukuoka), it held a flash mob event. Flash mobs have been taking place a lot in Japan recently, both as genuine social “happenings” and also as promo events.

Meanwhile, in Ikebukuro in Tokyo and Shinsaibashi in Osaka, the GU held a live fashion show in its shop window, and broadcast on Ustream. Check out the three super genki foreign models, who are meant to be “living” mannequins.

GU opened its two hundredth store in late December and is set next to move overseas. It also changed its branding logo from “g.u.” to “GU”, which it hopes will help it stand out more when it expands beyond Japan.