Musician and composer Ryuichi Sakamoto (The Last Emperor, Merry Christmas, Mr. Lawrence), perhaps the most respected person in the Japanese modern classical music world (or for that matter, in the entire Japanese music world), has been dedicating himself to politics of late.

Whether it’s the polemic of the environment — promoting reduced carbon emissions and green thinking — or the fundamental question of the day, nuclear power, he is much more interested in using his stature to promote public reactions to issues — rather than, say, plug CDs like AKB48 and all their cohorts.

He was one of the people behind a massive anti-nuclear power protest concert in the summer and in general has become a prominent post-3.11 dissenting voice. However, in his usual sophisticated way, rather than just being belligerant or dissenting, his appeals have always been creative and thoughtful. 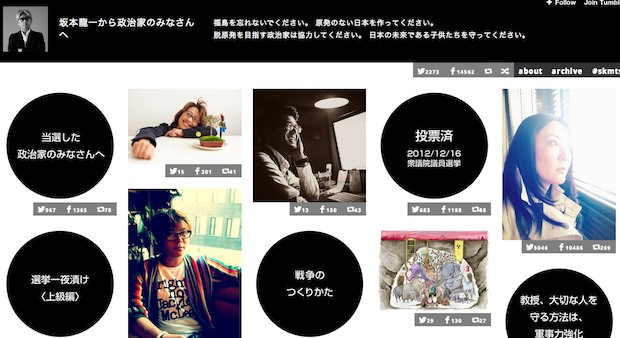 The No Nukes 2012 concerts was one example and now here’s another. SKMT Social is his typically meditative and non-aggressive Tumblr blog, featuring the messages of like-minded artists, writers, actors, designers, activists, photographers… it’s an endless as the Tumblr scroll seems to be.

“From Ryuichi Sakamoto to the politicians” is how the top banner begins.

Cynics could argue that Sakamoto, who lives safely esconced away in New York and will not feel the effects of any Fukushima radiation, is in no position to make such bold statements — and every time he flies over for his events, arguably his own carbon foot print is counter-productive to any green publicity he raises — but no, let’s leave the cavils to the captious. 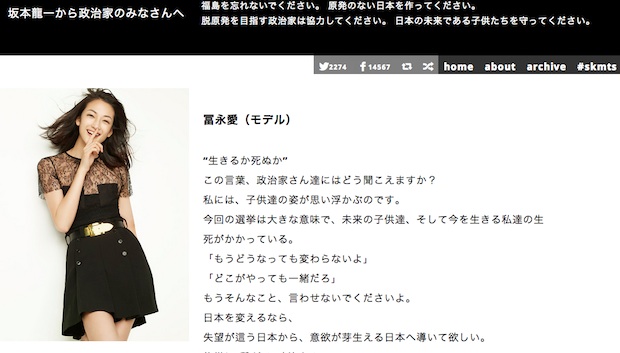 He has unquestionably rallied a very ecclectic and compelling selection of people for this project, including famous model Ai Tominaga and Jakucho Setouchi, probably the best known Buddhist monk in Japan.

With the recent election landslide returning the LDP to power, I think it’s safe to say that nuclear power — and for that matter, all interests of big business — are going to be protected for some time to come. This is why the voices of Sakamoto et al are so vital for providing some necessary dynamic protest. 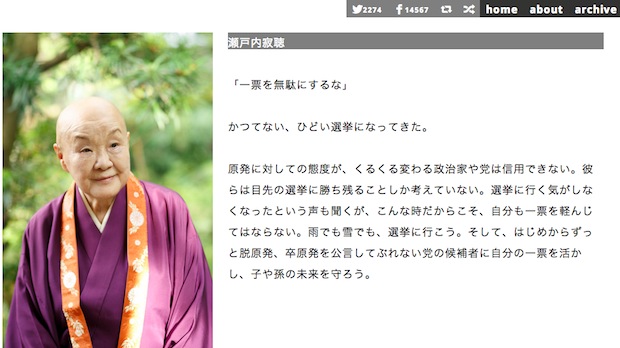 It’s also fascinating how Tumblr, Twitter and social media are playing such an important role in the anti-nuclear power movement. In the same way, communication media was essential during the last movements major periods of civilian dissent in Japan, such as the Beheiren anti-Vietnam War movement and the campus protests of the Sixties, in both of which television and leaflets (bira) assumed prominent roles.