July 31, 2015 by William
Comments Off on Setagaya ward in Tokyo becomes second government in Japan to recognize same-sex couples

Setagaya is joining Shibuya and becoming the second government body in Japan to offer legal recognition of same-sex couples.

Earlier this year Shibuya City, the ward of Tokyo that includes the major shopping district, make headlines by passing a resolution so that same-sex couples could receive certificates recognizing their union.

Now Setagaya, a large ward that includes residential areas as well as neighborhoods like Shimokitazawa and Sangenchaya, will do the same. It announced on July 29th that it would begin issuing certifications as early as November. 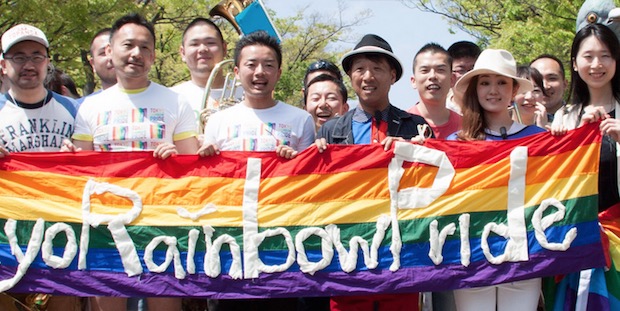 The details are yet to be fully announced but according to press reports, the certificates will be offered to current or future residents of Setagaya aged 20 years or older. The couple will make a “pledge of partnership” and then receive an official document recognizing their oath. The certificate will be valid for ten years and can be disposed of if both parties agree.

The certificates not only represent an important step forward for sexual minorities in Japan but also serve a practical purpose. Same-sex couples often find it hard to visit each other in hospital as “family members” or to buy property together.

However, unlike the Shibuya certificates, the Setagaya ones will be less legally binding and cannot be used at hospitals or for real estate contracts.

The mayor of Setagaya ward is Noburo Hosaka, a liberal politician and former journalist. In March, he received a formal petition from local gay residents to create the new certificates.

When Shibuya took the first step, while the reaction was generally very positive, there was some quiet speculation. Why was Shibuya doing this? After all, it’s nearby Shinjuku that is home to Tokyo’s main gay district of Nichome. Some wondered if Shibuya’s motives were to attract more male gay couples to the ward, with their double incomes and fashionable tastes.

Regardless, the onus is now on the central government in Japan to take the next step towards giving same-sex couples the right to marry.

Is the Kenjiro Sano 2020 Olympic and Paralympic Games logo "plagiarism"?