March 20, 2014 by William
Comments Off on Bayside condos and land prices rising due to 2020 Tokyo Olympic Games

Can the real beneficiaries of the 2020 Tokyo Olympics please stand up?

As expected, the biggest impact is going to be felt in the balance sheets of the real estate companies developing the bayside areas of the city.

Condominiums in the Tokyo Bay area are now being advertising everywhere, often with an emphasis placed on their earthquake-proof designs (following the 2011 disaster, people became understandably reluctant to purchase condos in a high-rise). And with the announcement of the Olympics for 2020, one of the main competition venue areas being around the bay (bizarrely and rather disingenuously introduced as “downtown” in the bid proposal), the popularity of purchasing condos in Toyosu and Harumi has jumped. Earlier this week land prices for the bay near the Olympic Village were announced as having increased a very profitable 10.9% from last year, according to media reports.

One condo complex, Deux Tours Canal & Spa, developed by Sumitomo Realty & Development Co. has 52 stories and features 1,450 condos set to go on sale in mid-May. These have been visited by some 2,000 parties since early January and inspection requests for information on the properties have jumped twofold since the Olympics were announced. Deux Tours is just one of many major developments taking place in the area; you can read a good English rundown on them on JapanPropertyCentral.com. 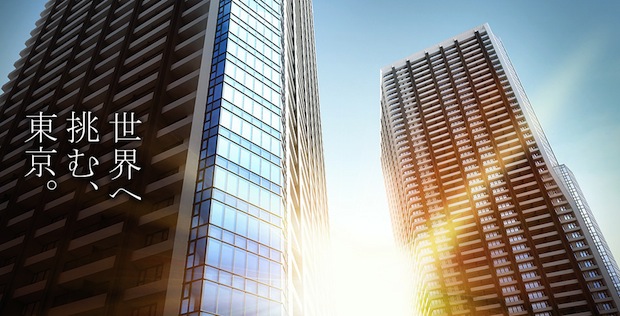 But what happens after the Olympics are over and we are left with a bay area cluttered with expensive condos and empty former Olympic Village facilities? Those residents in Harumi and Kachidoki are stuck closer to Chiba than Tokyo, and with a view of concrete where once water was.

The athletes’ Village is apparently set to be turned into residences, creating more opportunities for anonymous condos and more cash for the real estate firms. The government will be stepping up the infrastructure and transport links to the bay, currently close to the city center but with relatively restricted railway connections.

Many have compared the 2020 with the 1964 Games, and the Yoyogi, Omotesando and Harajuku areas all did well from the Showa-era event. However, those games happened just as the economy as a whole was really picking up. Incomes soared during the 1960’s and the nation’s GNP was third in the world within a few years. By contrast, in Japan, incomes are stable, trade is in deficit and prices are slowly rising.

Mitsubishi Jisho’s The Parkhouse Harumi Towers immediately benefited from the Olympics. Its showroom had double the visitor numbers on the day of the Games announcement last year saw twice as many visitors on the day the Olympics were announced. Analysts have touted a potential rise in bayside apartment prices by as much as 30% over the next few years. Areas like Ariake, Harumi and Kachidoki are set to have their populations potentially swell to three or four times their current size by 2020, when the Olympic juggernaut finally arrives, though Ariake and Toyosu are currently the more inconveniently located of the sites under the spotlight today. Harumi and Kachidoki are thus likely to emerge the winners of the real estate battle, but will it be the victory be merely a pyrrhic one?

People are riding the high of the Games now and snapping up condos, pushing up land prices in Tsukishima and Toyosu by 10.8% and 8.6% respectively, but with overall salaries and populations on the decline, the boom is surely not sustainable. It is likely to drop off after the interest in the Games as an event has finished. Sumitomo and Daiwa House et al will have filled their pockets in the short-term, but Tokyo is left with more concrete to add further to the heat island effect that hits us during the humid summer.