At last — hanami season is here! Grab your camera, pack a picnic and prepare for your anime moment under the falling petals. We’ve put together a list of some of the best places in the city to get into the spring mood.

Hanami, which literally means, “flower viewing”, is our favorite Japanese tradition (and it’s a very cheapo-friendly one too). You haven’t experienced Japan until you’ve had a party under the cherry blossoms. This year, the forecast for Tokyo puts first bloom at the 28th of March, with the trees expected to be in full bloom by the 5th of April.

Here are our recommendations for hanami venues… 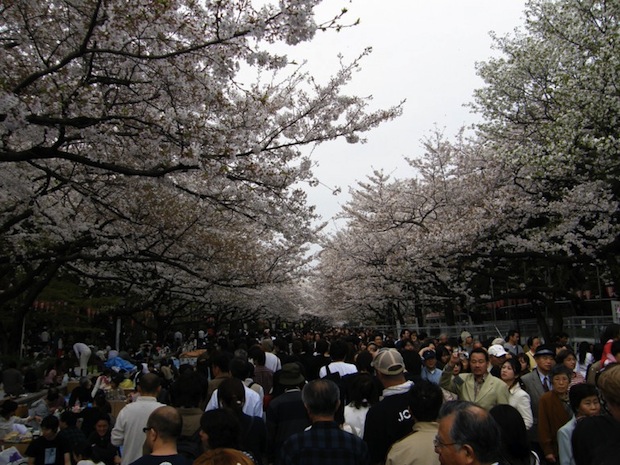 One of the most popular (and crowded) hanami spots in Tokyo, where the trees famously bloom a bit earlier. An estimated 800 cherry trees line the central path, and people picnic on both sides, using blankets or tarps to claim whatever space they can. If you time it right, you might be able to boat around the pond-lake thing too. Whatever you decide to do, our advice is to get there early! Lanterns are strung up, so you can party on into the evening. Image by Rob Towell, used under a Creative Commons Licence.

If you’re keen on somewhere a little more peaceful, this is a good place. There are around 1,000 cherry trees — a whole bunch of different varieties — which bloom at different stages. The park is spacious, with nice big lawns and plenty of walking paths, so even when it’s crowded, you can still enjoy a chilled stroll under the blossoms. There’s an English garden, French garden and Japanese garden — head to the English one for the best picnic spots. Entrance to Shinjuku Gyoen is 200 yen. Pic by Dave King, used under a Creative Commons Licence.

To celebrate Emperor Akihito’s 80th birthday (which was in December), the cherry tree-lined Inui-Dori will be open to the public for five days of cherry blossom viewing this year. It’s normally closed off, so this is a pretty big deal and a rare chance to see what we assume are especially exquisite sakura (cherry blossoms). It will only be open from the 4th-8th of April, from 10-4 (last entrance at 3), so get there early, and prepare to queue! It’s probably best not to bother with a picnic, as you’ll just be ambling (or more likely, jostling with the masses). Image by ganaselmi, used under a Creative Commons Licence.

Chidorigafuchi may be difficult to pronounce, but it’s one of the city’s most scenic hanami spots — and also a place where you can hop in a boat and row your date (or lazy friends) around an Edo-era moat (which is part of the Imperial Palace). If you’re wobbly on the water, you can mosey along the 700m-long path, ooh-ing and ah-ing your way through the tunnel of cherry blossoms. Yasukuni Shrine, which also has loads of cherry blossoms, is nearby. Image by Kimono Berlin, used under a Creative Commons Licence.

The area stretching from Azumabashi Bridge to Sakurabashi Bridge on the Sumida River is a super famous hanami spot, and has been for centuries. More than 1,000 cherry trees line the river, making for great photo opps. You can also see Tokyo Skytree from here. The area can get crowded — if you feel frazzled, you can duck out and take a mini cruise on a yakatabune boat.

If you’re keen on getting out of Tokyo central, or miss the main hanami season by a few days, you can always check out this park in Tachikawa (about 40 minutes from Shinjuku). It’s huge, and has 1,500 cherry blossom trees – you might even see some daffodils, tulips and lavender too!