Recently McDonald’s Japan released a new menu item that is simultaneously surprising and intriguing both the populous in Japan and abroad: Chocolate-drizzled french fries. If you’re anything like me you had a series of thoughts something like this when hearing the news. “Gross.” “Why would they do that?” “I wonder what it tastes like…” “Should I try some?”

Yes, this daring little menu item is interesting indeed, and it’s the reason why I broke my long-standing McDonald’s fast. I guess their marketing team is doing a better job than I thought. 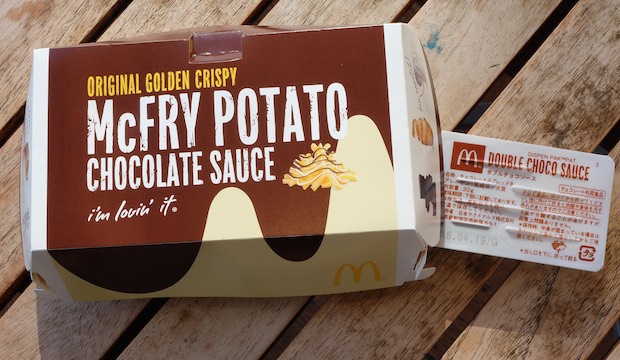 Before I get into the actual experience of what eating these bad boys was like we should talk about why they exist. McDonald’s isn’t doing too well in Japan these days. There have been hundreds of store closings nationwide as well as huge dips in sales — suffering a net loss of $19.4 million in the first nine months of 2015 alone. A series of scandals including foreign objects in their food have eroded the trust that many Japanese have in the corporation. My Japanese father-in-law has referred to the company as both “No good” and “Over.” Needless to say the stockholders aren’t too happy with this turn of events and the golden arches needed to start trying new things.

One of the new things that McDonald’s is trying is the McChoco, chocolate drizzle packs for their french fries. That’s right, these aren’t special french fries made for dessert purposes, they are the standard McDonald’s french fries in a fancier box with a few add-ons. Your McChoco Potato (or, as labeled in English, McFry Potato Chocolate Sauce) will set you back ¥330 (about $2.80) and come with a double-barreled squeeze package containing white chocolate and milk chocolate goo as well as a fork (which I recommend using). Once you’ve gathered your courage you can put on your artist hat and try to draw some fancy chocolate lines on your fries freehand. After that all there’s left to do is dig in.

Now, we’ve established that the fries taste like McDonald’s fries, so what about the chocolate? It’s sweet. Very sweet. The milk chocolate is similar to a sugary chocolate pudding in flavor while the white chocolate stuff tastes like cake frosting. It’s a salty and sweet combination and we’ve all come to accept that flavor pair, right?

Here’s how it went for me:

3rd bite: Getting used to this… starting to make sense. 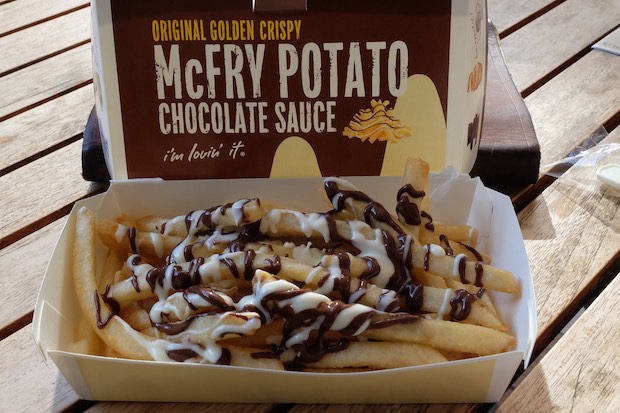 The truth is they taste exactly like what they are, McDonald’s fries with sugary chocolate drizzle on them. Have you ever had a chocolate covered pretzel before? It’s something like that except a lot saltier. The best bites were the ones most saturated in chocolate, believe it or not. Other bites with less drizzle were overpowered by the flavor of the fries. I’m a bit surprised that Donald (Yes, his name is Donald McDonald in Japan) didn’t supply me with more chocolate sauce than I knew what to do with. After all, this is the company famous for super-sizing. But actually the amount of chocolate dressing you get is a little skimpy.

Here’s the final verdict: These fries, available until mid-February, won’t change your life. They are an interesting idea, and they aren’t disgusting. But in the end they are just french fries with chocolate sauce. If you are expecting anything else from this experience you’ll be disappointed. But if you don’t think too much about it, you might enjoy parts of what happens in your mouth.

Would I get them again? No. It’s been hours since I ate them and the aftertaste is still there. Do I regret getting them? Not at all. I lived on the wild side of fast food for a brief moment and lived to tell the tale. 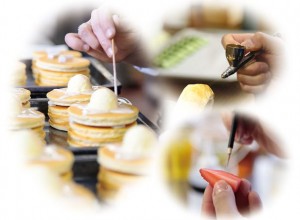 Restaurant Food Samples: When the art of the fake “copy” is worth more than the original 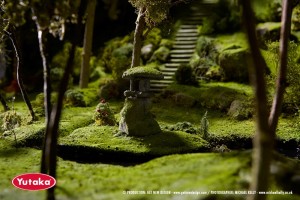 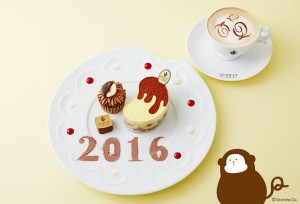