The controversy over the new National Stadium to be built for the 2020 Tokyo Olympics rolls on and on.

After Kengo Kuma’s design was chosen in the second contest that became necessary when Zaha Hadid’s divisive design was scrapped due to its escalating budget, then came anger and accusations from his predecessor that his design was a blatant plagiarism of hers.

There was speculation at the time that Hadid’s firm had been made the scapegoat since the design itself did not have to be expensive; it was actually the construction costs being handled by administrators that were spiralling out of control. With design adjustments and other choices, the cost could arguably have been managed.

No one on the 2020 organizing committee (which includes the renowned blunderer former prime minister Yoshiro Mori) nor on the Japan Olympic Committee board resigned over the affair and everyone, from the wizened design judges (including Tadao Ando) to the central government, Olympic committee and Tokyo governor pointed the proverbial finger at the other.

Hadid’s efforts to revive her design came to naught. The second design was chosen quickly in order that construction could start and still finish in time for the 2020 Games. (The 2019 Rugby World Cup, a pet product of Mori’s and which was one of the reasons to justify demolishing the old stadium and building a new, larger one in the first place, will not be hosted in the stadium.)

Hadid immediately noted the striking similarities between Kuma’s design and hers, which was selected in 2012 and unveiled to a mixed response. “Like a bicycle helmet” was a common refrain. (Kuma’s has already been dubbed a “hamburger”.) “A dull, slow form, like a turtle waiting for Japan to sink so that it can swim away” was how famed architect Arata Isozaki described it in late 2014. The Pritzker-winning Hadid is famously outspoken and gave a typically feisty reaction: the Japanese architecture community was simply aggrieved that a foreigner had been awarded the prestigious contract. 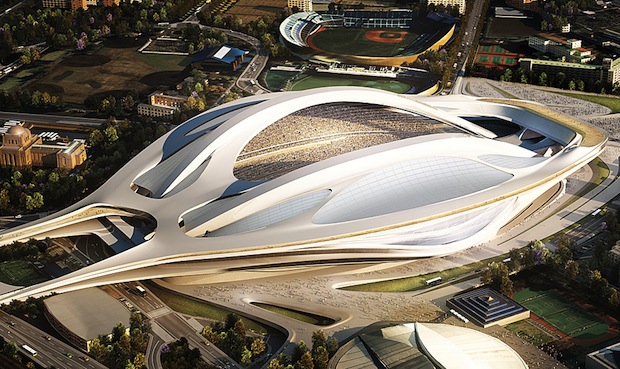 It seems that what she said came back to haunt her. The powers that be shut the doors on the process leading up to the second design choice, which was naturally a Japanese one.

After the announcement, Hadid sent a report to the Japan Sports Council detailed the alleged plagiarisms. She then also recently came out with fresh allegations that final payments were being withheld by Japan Sports Council from her and her subcontractors unless she agreed to what is effectively a gagging order and also to give up her copyright. This, she claimed, indicated that indeed Kuma’s design was essentially plagiarizing the work her firm had done.

Now Kengo Kuma has come forward to put his side of the story to the press. 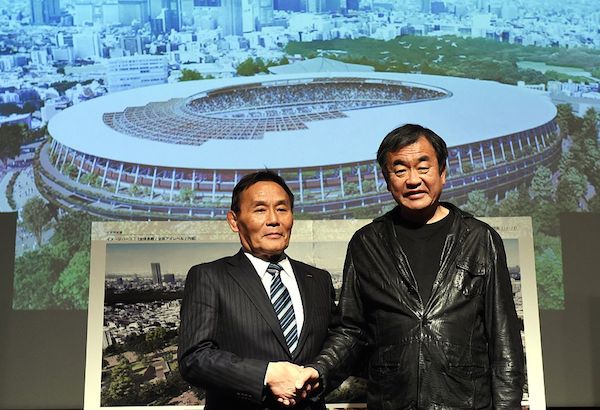 “In the design, I would like to say there are no similarities at all,” Kuma told reporters.

“The conditions set for the competition mean that automatically some similarities emerge,” he said, adding that “the concept is completely different, so it is absolutely a different building, despite the similarities”.

The Olympic organizing committee also recently reported that the original budget for hosting the Games would not be adequate. The actual budget could be as much as six times the original estimate! For an Olympics bid that marketed as compact and ecological, so far the Games have been nothing but excess and failure.

(On a side note, the Japanese press has consistently referred to Zaha Hadid in Japanese as “Miss Zaha”, rather than use her surname. Given the amount of controversy, money and other issues at stake here, this is a minor gripe, but this always infuriates us when we see it.)