Their biggest hit was likely the Otamatone Sound Toy, a remake of the theremin that came out a few years ago, though they are involved with new projects the whole time. Led by the irrepressible Novumichi Tosa, the boss puts himself front and center of the marketing. He’s the guy in the video below demonstrating Maywa Denki’s latest product, Mr Knocky. As Tosa shows, Mr Knocky is a surprisingly inventive drum instrument toy. 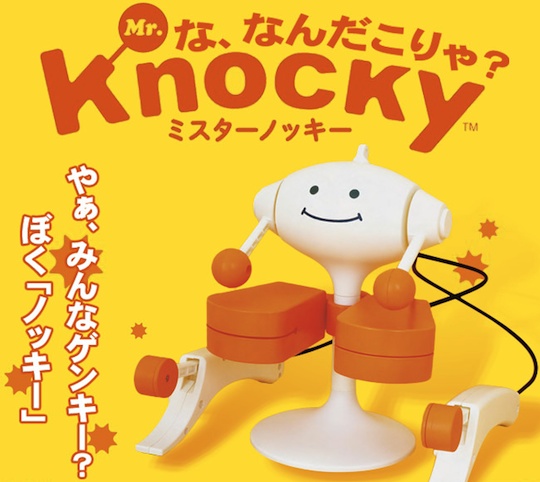 It doesn’t use batteries, instead relying on what Tosa calls “wire action”. As you shake the “mallet controller”, it makes Mr Knock drum. He has two drums and so there are two controllers. Switch the way you shake them to vary the drumming. This requires real skill to do well. You can hang Mr Knocky around your neck too if you want to walk around town playing his drums.

The second way you can play Mr Knocky is by putting the controllers flat on a surface (they helpfully have sticky pads to make this easier) and fitting them together. This makes them into de facto piano keys and now you can use your fingers to play the drums. Even better, get two Mr Knocky toys and combine the controllers so you have four drumming piano keys, all fitted together to make one mega percussion unit. 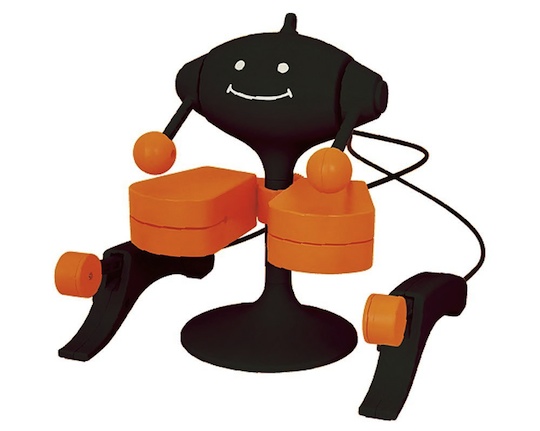 Here’s the full demo. Towards the end Tosa gives a showcase of some of the more difficult things you can do with Mr Knocky, such as “crescendo knock”, “paradiddle knock” and “unison knock”.

Mr Knocky comes in two colors (white or black) and can even be given some extra character with the mustache accessory that is included.

But if you’re really keen on customizing things, take off Mr Knocky’s drums and replace them with other items like empty drink cans. The angle of Mr Knocky’s drumming arm can also be adjusted depending on the size of the ersatz drum.

Mr Knocky will be released in early October and can be purchased via JapanTrendShop.

To end, here’s Maywa Denki performing with the SoftBank robot Pepper earlier this year, along with a whole gaggle of their wacky inventions.