Hakuhodo’s latest in its series of HACKist creative lab prototypes is Pechat, a simple button-shaped device that “lets your stuffed animals chat”.

In essence, Pechat is a yellow button that can be added to any children’s toy, transforming it into a talking, interactive character.

Co-developed with Hakuhodo’s innovation team monom (who made the iDoll and Memory Clock), Pechat is currently just a concept model and details on when it may become commercially available are currently unannounced.

The “chat speaker” button works with a dedicated app to communicate in four ways. Voice Chat converts what you say into a cute voice. Text Chat reads out what you type in a cute voice (there’s a cute theme here). Tap Chat allows you to save dialogue, songs and stories in advance to be played whenever you want them. And Auto Chat responds to what a child says to their toy.

Its other functions include a “crying detector” to measure if your child is crying and then alert your phone as well an alarm with customizable dialogue and a “smart voice change” that converts what you say into a cute voice (apparently this is different to the Voice Chat function).

There has also been a mini boom in these kinds of talking toys lately in Japan, including the Robi robotic toy, Omnibot OHaNAS sheep, and Meebo kindergarten robot, plus the cuddly teddy bears Himitsu no Kuma-chan and Cocolo Bear. 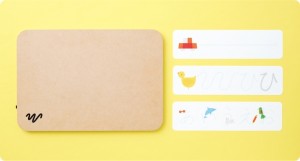