March 20, 2013 by William
Comments Off on Tokyo’s train lovers refuse to say sayonara to Shibuya station

A minor revolution has occurred in Tokyo transport. The Tokyu Toyoko line has gone underground at last for the stretch between Shibuya and Daikanyama, spelling the end for the 48-year-old Tokyu Shibuya Station.

Finally we can utilize the much-neglected Fukutoshin Line, that whisks passengers from Shibuya up to Ikebukuro and beyond, and which will be sharing platform space with the new Toyoko Line terminal. The idea is that you will be able to hop over to the Metro and zip up to Shinjuku and northern Tokyo without having to go up and over a lot of staircases to battle the crowds of Shibuya when making your transfer.

The Shibuya Tokyu Toyoko Station was a much loved if strange beast, with passengers on the platforms visible despite being a storey above ground level due to the semi-transparent station wall (i.e. with odd open parts in the building, jolly cold in the winter), especially if you were using the pedestrian footbridge to walk over the Tamagawa-dori, Roppongi-dori, Aoyama-dori junction on the east side.

You can compare the old station (left) and the “new” one (right) in the images below. (As a side note, I presume the “H E L” that is cut off would spell “Hello”, rather than the word that might more accurately describe Tokyo’s trains, at least at rush hour, “Hell”.)

Some train fans (densha otaku) have been taking the demise of the Toyoko Line very personally. There was a mad scrum to ride the trains during the final day of its existence in its old form, capped by some passengers literally refusing to leave the station.

This hilarious footage captures the scene of passionate geeks having to be forced through the ticket gates by station staff.

This is what the final day for the station was like.

Now the otaku must enter a brave new world of a Toyoko Line that is underground, at least until Nakameguro.

The old Shibuya Station concourse will be an event space until May. Otsukare! 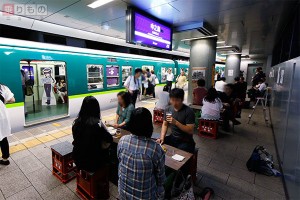