May 15, 2013 by William
Comments Off on Toru Hashimoto declares wartime comfort women “necessary”

On Monday the brash right-wing politician shocked reporters in Osaka when he said that the so-called “comfort women” (local women forced into prostitution by colonizing Japanese military during the war in Asia) were “necessary” (hitsuyo) for the army’s discipline.

The Osaka Mayor then told a story that he had advised a leading American military staffer in Okinawa recently to make use of prostitutes to prevent rapes and sexual assaults between US military personnel and Okinawans. (US military are banned from visiting brothels, and there have been perennial and notorious incidents of rape by soldiers on local women, especially in Okinawa.) 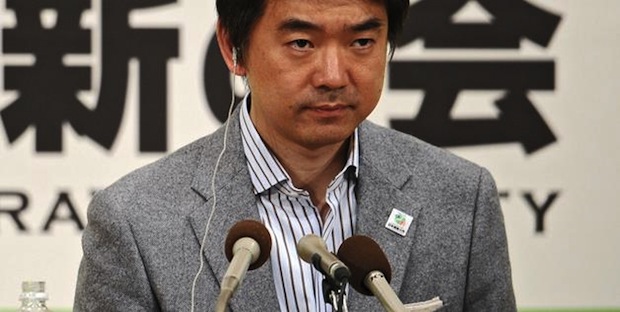 Some 200,000 women are thought to have been forced into prostitution during the war. They were mainly from China and South Korea, but also from the Philippines, Indonesia and Taiwan.

China has since responded, “We are shocked and indignant at the Japanese politician’s remarks, as they flagrantly challenge historical justice and the conscience of mankind.”

A Korean government spokesperson said, “The wartime violations of women is a grave violation of human rights that is widely shared by the international community. The remarks by Hashimoto reveal a serious lack of perception for women’s human rights.”

The founder of Nippon Ishin no Kai (Japan Restoration Party) was formerly a TV celebrity lawyer, before turning governor of Osaka Prefecture and then switching to Osaka Mayor. During his regime he made his reputation for a blitzkrieg approach to streamlining the public purse, trying to reduce the size of the bankrupt city’s debts. Along the way he has made many enemies, not least the people whose budgets he dramatically cut.

He is also known for his outspoken and frequently provocative comments. In the past he has offended the teachers’ union and more recently declared war on the venerable traditional performing arts of Bunraku, one of Osaka’s few claims to high culture but which is run by a closed, heavily subsidized foundation.

He also was revealed to have had an affair with a hostess last year. He has since staked his claim on the state government by forming a national party, which quickly rose to be Japan’s third largest in the Diet after last year’s election. (For a good take on Hashimoto’s background, starting with his nomenclature, we direct readers to the superb Spike Japan post from 2012.)

Hashimoto is also no stranger to ruthless pragmatism when it comes to money, having declared interest in turning Osaka into a haven for casinos (currently not permitted under Japanese law) and reviving the old style of red light districts (officially prostitution is banned in Japan, though it is still rampant and often not even disguised).

Osaka is home to Japan’s largest community of ethnic Korean Japanese, the so-called Zainichi Kankokujin, which you would imagine should have made Hashimoto more sensitive to the topic of Japan’s imperial adventures in Asia last century. He is also a minority himself — he comes partly from the Burakumin caste, the social strata that historically were forced to live only in particular areas and do certain “undesirable” jobs. (The idiosyncrasies of the Japanese family register system recording family addresses is thus how the caste can still be traced today, despite it not ostensibly being an ethnic division.) Burakumin may sometimes face discrimination even today, and until recently had a lot of trouble finding marriage partners outside their caste or employment in large corporations. (There is also the infamous Sayama Incident in 1963 case, where the police pinned a murder on a Bunraku caste man to cover up their own incompetence.) 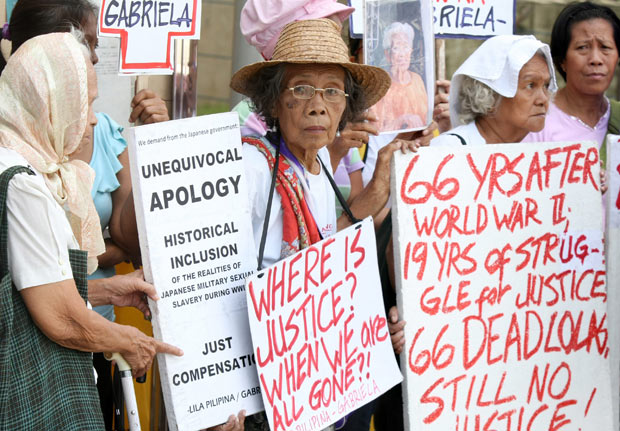 Logically speaking, Hashimoto isn’t wrong. Sex, it has to be said, IS one of the best ways to maintain troop discipline far from home. People have always known this. GHQ and the Japanese government very quickly organized a local version of comfort women to keep the newly arrived American forces from raping “ordinary” women in the first few weeks of the occupation. Needless to say, the women were typically recruited from poorer backgrounds.

Saying that the comfort women were an inevitable and tragic consequence of war is not inaccurate. By a strict definition of Hashimoto’s words, they were “necessary” (hitsuyo) — though it is a grossly insensitive phrase.

War always brings death and abuse; no side is ever free of crime, as we are seeing today in Syria. What makes the comfort women issue different is that Japan, though having apologized for the war itself, has never paid compensation to the women that were forced into prostitution. The victims continue to campaign for recognition. The first Abe government in 2007 even went so far as to deny that there is evidence for forced prostitution having existed, which is the equivalent of Holocaust revisionism in the eyes of the Chinese et al. (And this is before we even touch on the even thornier subject of the massacre at Nanking.)

Calling the comfort women “necessary” sounds like he was condoning the practice, but I suspect Hashimoto is not as insensitive as that. He was merely speaking of grim realities — not advocating or justifying what happening. “If proof does appear, we have to apologize. At the moment, it is the opinion of the government that there is none. However, a recent Cabinet decision seemed to indicate new proof would soon appear and I think it’s good that related organizations are making efforts to gather it,” he said.

The co-leader of Hashimoto’s party, the equally provocative and strident Shintaro Ishihara (pictured below, with Hashimoto), backed up his younger peer and stated that what he had said was essentially correct. 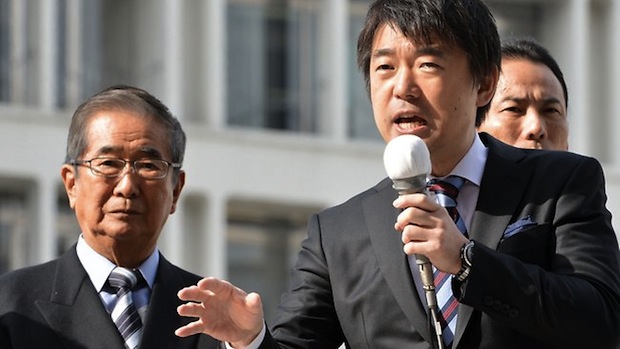 It’s not been a good time for Japanese politicians and their propensity for gaffes. Ishihara’s successor to the governorship of Tokyo, Naoki Inose, broke Olympic rules by criticizing Tokyo’s rivals for the 2020 Games, Madrid and Istanbul, suggesting in a now infamous New York Times interview that their facilities were not up to scratch, and that in particular Islamic countries tend to fight each other. “So, from time to time, like Brazil, I think it’s good to have a venue for the first time. But Islamic countries, the only thing they share in common is Allah and they are fighting with each other, and they have classes,” he was quoted as saying.